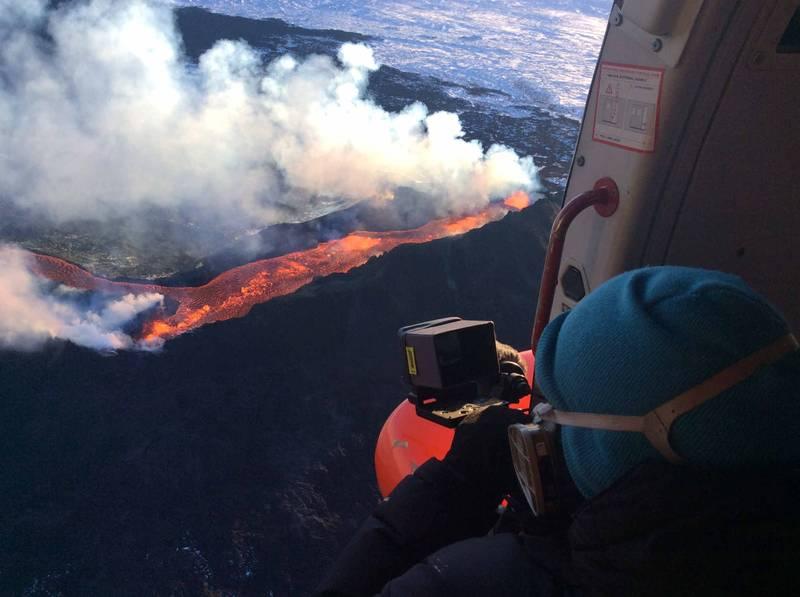 A new study has found a previously undetected potential health risk from the high concentration of small particles found in a boomerang-like return of a volcanic plume.

Dr Evgenia Ilyinskaya from the Institute of Geophysics and Tectonics, alongside a team of scientists from the UK and Iceland, traced the evolution of the plume chemistry from the 2014-2015 Icelandic Holuhraun lava field eruption and found a second type of plume that impacts air quality.

This second plume had circled back to Icelandic cities and towns long after the health warning about the initial plume had been lifted.

Lead author, Dr Ilyinskaya said: “The return of this second, mature, plume, which we referred to as a ‘plumerang’, showed that the volcanic sulphur had undergone a gas-to-particle conversion by spending time in the atmosphere. This conversion meant that the sulphur dioxide (SO2) levels of the plumerang were reduced and within the European Commission air quality standards and therefore there were no health advisory messages in place.

“However, our samples showed that the mature plume was instead very rich in fine particles which contained high concentrations of sulphuric acid and trace metals. The concentrations of these trace metals did not reduce as the plume matured and included heavy metals found in human-made air pollution that are linked to negative health effects.

“On at least 18 days during the 6-month long eruption the plumerang was in the capital city of Reykjavík, while the official forecast showed ‘no plume’.”

The fine particles found in the plumerang are so small they can penetrate deep into the lungs, potentially causing serious health problems such as exacerbating asthma attacks.

It is estimated that short and long-term exposure to this type of fine particles, from both human-made and natural sources, cause over three million premature deaths globally per year and remains the single largest environmental health risk in Europe.

Dr Ilyinskaya is currently researching the possible health impacts of the plumerang in collaboration with the University of Iceland. However there is already anecdotal evidence suggesting adverse effects.

Dr Ilyinskaya said: “We spoke to people living in Reykjavik who described a burning sensation in the throat and eyes when the SO2 levels would have been well within air quality standards but the particle-rich plumerang would have been over the city.”

During the six-month-long eruption, the Icelandic Meteorological Office’s daily forecasts of the plume dispersion accounted only for SO2 concentrations in the young plume. The mature plume was not forecast as part of volcanic air pollution monitoring.

The study, published today in Earth and Planetary Science Letters, recommends that in future gas-rich eruptions both the young and mature plumes should be considered when forecasting air pollution and the dispersion and transport pattern of the plume.

Co-author Dr Anja Schmidt, from the Institute for Climate and Atmospheric Science said: “The Holuhraun eruption caused one of the most intense and widespread volcanogenic air pollution events in centuries. It’s estimated that the amount of sulphur dioxide released into the atmosphere was roughly two times that of a yearly total of SO2 emissions generated by the European Economic area.

“It gave us a rare opportunity to study volcanism of this style and scale using modern scientific techniques. The data we have gathered will be invaluable to preparing for a potential future event and its impacts on air quality and human health.”

Acknowledgements:
This work was funded by the NERC urgency grant NE/M021130/1 ‘Source and longevity of sulphur in Icelandic flood basalt eruption plumes’.

The research has also benefited from the funding of the European Research Council under the European Union's Seventh Framework Programme (FP/2007-2013)/ERC grant agreement no. [279802]; European Community’s Seventh Framework Programme Grant No. 308377 (Project FUTUREVOLC) and support from the NERC-funded Centre for Observation and Modelling of Earthquakes, Volcanoes and Tectonics (COMET).