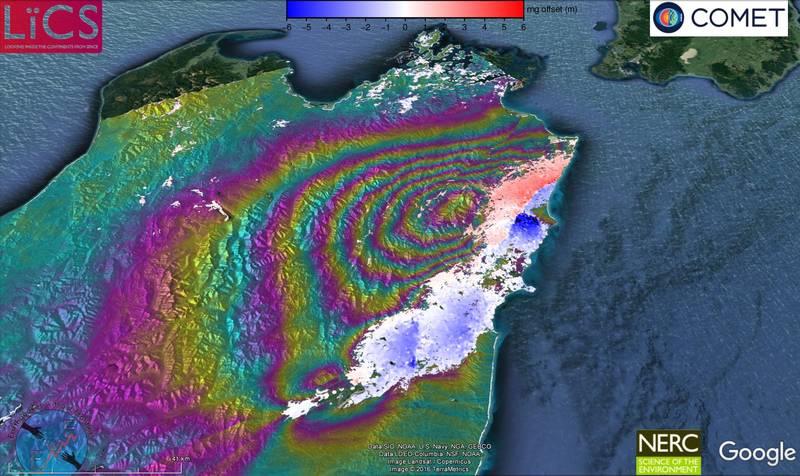 The South Island earthquake was one of the most comprehensively recorded earthquakes in history. Satellite images of the earthquake and its aftermath have enabled scientists to analyse the quake in an unprecedented level of detail.

Professor Tim Wright, study co-author and director of Centre for the Observation and Modelling of Earthquakes, Volcanoes and Tectonics (COMET) at the University of Leeds, said: “We’ve never seen anything like the Kaikoura quake before, it was one of the most complex ever recorded.

An earthquake commonly ruptures across a single fault line or faults that are closely grouped; Kaikoura ruptured at least 12 major faults. This challenges many assumptions about how individual faults control earthquake ruptures.”

Immediately following the start of Kaikoura’s earthquake in November, the Sentinel-1 and ALOS-2 satellites were tasked with gathering images and data. University of Leeds researchers used the data to provide a rapid analysis of what was happening during the quake.

They found that seismic readings of the earthquake were not giving accurate assessments of where the ruptures were occurring.

Professor Wright said: “Seismic readings are currently the fastest method of gathering earthquake data as they can quickly read shockwaves sent through the earth – but they paint a crude picture. The complexity of the Kaikoura earthquake caused seismologists to completely misinterpret the earthquake based on these seismic waves.

“Satellites such as the European Space Agency’s Sentinel-1 measure the way the ground deforms at very high resolution. The detail in the images showed us that ruptures took place across many separate faults.

“One of the aims of COMET is to expand satellite capability to provide rapid response earthquake data to ensure residents and rescue workers have access to fast and accurate information.”

The satellites provided pre- and post-earthquake images to measure the extent of land movement. Kaikaoura’s earthquake caused pieces of earth to move up to 25 metres and surface ruptures measuring 12 metres. This caused large scale landslides and triggered a tsunami.

Seismic readings are currently the fastest method of gathering earthquake data as they can quickly read shockwaves sent through the earth – but they paint a crude picture. The complexity of the Kaikoura earthquake caused seismologists to completely misinterpret the earthquake based on these seismic waves.

In a study published today in Science, the team of researchers reports the full range of data analysed from Kaikaoura’s earthquake, including satellite imagery, field observation, GPS data and coastal uplift data. The research will prompt reassessment of how many different faults can be involved in a single earthquake and could potentially feed into revaluations of seismic hazard models.

Lead researcher Dr Ian Hamling, a natural hazards geodesist from New Zealand research institute GNS Science and a former PhD Student from the School of Earth and Environment, said: “There was growing evidence internationally that conventional seismic hazard models are too simple and restrictive.

“The message from Kaikoura is that earthquake science should be more open to a wider range of possibilities when rupture models are being developed. It underlines the importance of re-evaluating how rupture scenarios are defined for seismic hazard models. ”

While earthquakes like Kaikoura’s do not commonly occur, the data we’ve gathered from this event will expand our understanding of similar boundary zones around the world.

New Zealand’s complex network of faults are similar to those found in western United States, Japan and central Asia.

Co-author Dr John Elliott also from Leeds’ School of Earth and Environment said: “While earthquakes like Kaikoura’s do not commonly occur, the data we’ve gathered from this event will expand our understanding of similar boundary zones around the world.

“Not only could the data help inform us for the future but it may change how we’ve interpreted ancient earthquakes. If an earthquake like Kaikoura’s took place thousands of years ago, current methods of paleo-seismology would possibly see it as a series of earthquakes over a long period of time, rather than as one large single quake.”

For any additional information please contact University of Leeds Media Relations on pressoffice(at)leeds.ac.uk or +44 (0)113 343 4196.

The NERC Centre for Observation and Modelling of Earthquakes, Volcanoes and Tectonics (COMET) provides national capability in the observation and modelling of tectonic and volcanic hazards.  COMET focuses on delivering services, facilities, data and long-term research to produce world-leading science that can help the UK and others to prepare for and respond rapidly to earthquakes and eruptions.  This includes developing systems that provide baseline measurements of volcanic and tectonic processes.