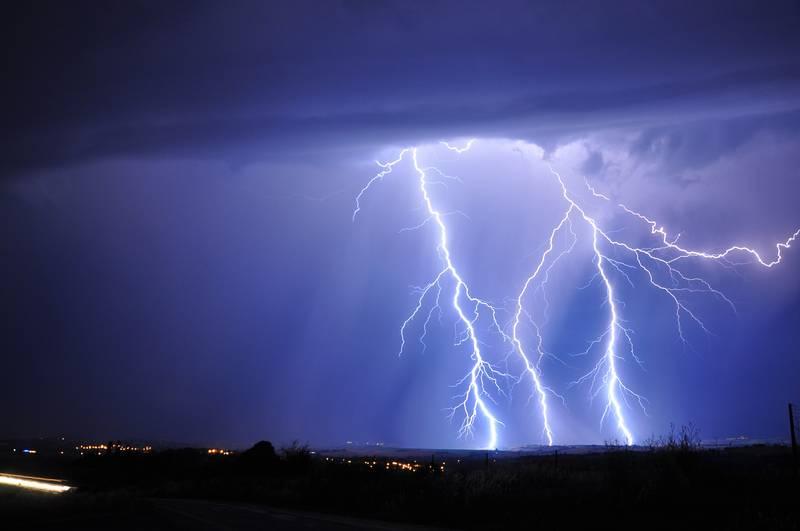 Global warming may lead to a drop in lightning strikes, affecting atmospheric composition and the frequency of natural forest fires in the tropics, a new study suggests.

Using a newly-devised method, scientists including Dr Declan Finneyand Professor Alan Blyth from the University of Leeds, have forecast a 15 per cent drop in the average number of lightning flashes worldwide by the year 2100, if global temperatures continue on their predicted upward trend.

Study lead author Dr Finney, from the Institute for Climate and Atmospheric Science at the School of Earth & Environment, carried out this research while based at the University of Edinburgh. He said: “Our method looked closely at the impact of climate change on the fundamental components that lead to lightning.

“Global warming over the next century is expected to alter atmospheric temperature, humidity and stability. This would have a significant effect on the ice particles and soft hail which build up electrical charge when they collide in thunderstorms. It’s this charge in clouds that generates the lightning flashes and thunder during storms.

“Increases in the amount of cloud ice or the strength of the updraughts in the clouds leads to an increase in the charge generated and therefore the number of lightning flashes.

“The climate change scenario used in the study was an approximate five degree Celsius rise in global temperatures by 2100. Under this scenario there are large impacts on the formation and movement cloud ice particles, leading to a significant drop in lightning occurrence.”

Lightning is an important source of nitric oxide – which is a precursor of ozone, and which influences the lifetime methane. Both ozone in the lower atmosphere and methane are important greenhouse gases, and changes in their concentrations can lead to warming or cooling effects on the atmosphere.

The study, published today in Nature Climate Change, calls for lightning simulated in chemistry-climate models to incorporate more of the underlying physics of lightning generation. And thereby better simulate the interactions and feedbacks between atmospheric composition and climate change.

Dr Finney said: “Understanding the future changes in lightning is of importance to predicting subsequent changes in aerosol chemistry, natural wild-fires ignited by lightning strikes, and lightning damage to infrastructure. The largest difference we observed was in the tropics, where the most lightning occurs and are the main source of ignition for natural wild-fires.”

Study co-author Professor Alan Blyth, Director of Atmospheric Physics at the National Centre for Atmospheric Science, said: “The new results showing a decrease of lightning in a future climate are interesting and challenge not only the way of representing lightning in chemistry-climate models in a more physically-based way, but also mixed-phase clouds – clouds that are made up of supercooled cloud droplets and ice crystals.”

Previous studies have used cloud-top height to predict lightning frequency and the potential impact of climate change. While these methods have indicated global warming could lead to an increase in lightning occurrences, the study highlights the weaknesses in this approach, including the fact that lightning is not caused by the height of the cloud but by the electrical charge built up through collisions of ice particles.

Dr Finney said: “The method here, which relates the motions of cloud ice to lightning activity, incorporates much more of the fundamental physics governing lightning formation than previous methods applied to simulations of climate change. Our research questions the reliability of previous projections of lightning, and encourages further study into the effects of climate change on cloud ice and lightning.”