Update on the Larsen-C iceberg breakaway 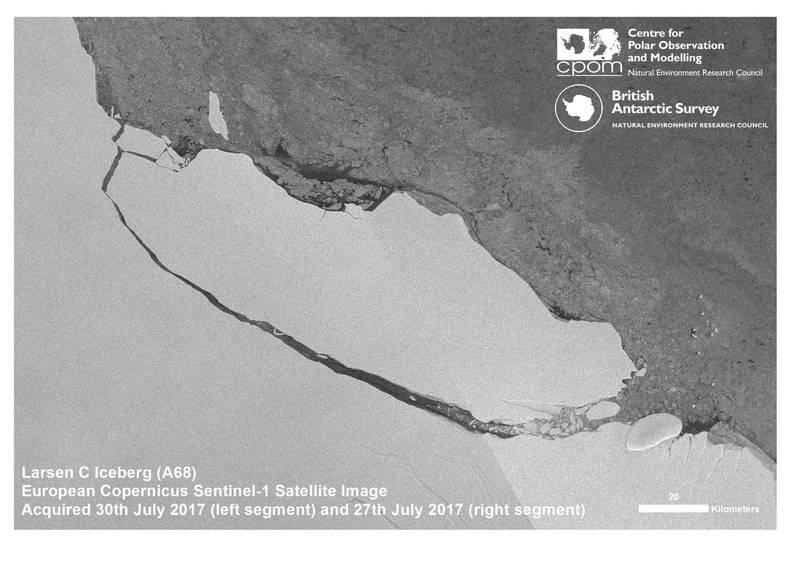 The largest remaining ice shelf on the Antarctic Peninsula lost 10% of its area when an iceberg four times the size of London broke free earlier this month.

Since the 12 July 2017 breakaway Dr Anna Hogg, from the Institute for Climate & Atmospheric Science, School of Earth and Environment at Leeds and Dr Hilmar Gudmundsson, from the British Antarctic Survey(BAS), have continued to track the iceberg – known as A68 – using the European Space Agency (ESA) and European Commission’s Copernicus Sentinel-1 satellite.

Reporting this week in the journal Nature Climate Change Dr Hogg and Dr Gudmundsson, examine the events leading up to this dramatic natural phenomenon and discuss how calving of huge icebergs affects the stability of Antarctic ice shelves.

Their observations show that since the calving event, the berg has started to drift away from the Larsen-C, with open ocean clearly visible in the ~ 5 kilometre gap between the berg and the ice-shelf.

A cluster of over 11 ‘smaller’ icebergs have also now formed, the largest of which is over 13 km long. These smaller ice bergs have broken off both the giant iceberg and the remaining ice-shelf.

Dr Hogg, an ESA Research Fellow in the Centre for Polar Observation and Modelling (CPOM) at Leeds said: “The satellite images reveal a lot of continuing action on Larsen-C Ice Shelf. We can see that the remaining cracks continue to grow towards a feature called Bawden Ice Rise, which provides important structural support for the remaining ice shelf.

“If an ice shelf loses contact with the ice rise, either through sustained thinning or a large iceberg calving event, it can prompt a significant acceleration in ice speed, and possibly further destabilisation. It looks like the Larsen-C story might not be over yet.”

Their article asserts that a calving event is not necessarily due to changes in environmental conditions and may simply reflect the natural growth and decay cycle of an ice shelf.

Dr Gudmundsson said: “Although floating ice shelves have only a modest impact on of sea-level rise, ice from Antarctica’s interior can discharge into the ocean when they collapse. Consequently we will see increase in the ice-sheet contribution to global sea-level rise.

“With this large calving event, and the availability of satellite technology, we have a fantastic opportunity to watch this natural experiment unfolding before our eyes. We can expect to learn a lot about how ice shelves break up and how the loss of a section of an ice shelf affects the flow of the remaining parts.”

Ice-shelf retreat on the Antarctic Peninsula, has been observed throughout the satellite era – about 50 years. Large sections of the Larsen Ice Shelf A and B, and the Wilkins1 ice-shelf collapsed in a matter of days in 1995, 2002, and 2008, respectively.

Geological evidence suggests that ice-shelf decay of this magnitude is not unprecedented, however, prior to 2002 the Larsen-B ice shelf remained intact for the last 11,000 years. While Antarctic ice shelves are in direct contact with both the atmosphere and the surrounding oceans, and thus subject to changes in environmental conditions, they also go through repeated internally-driven cycles of growth and collapse.