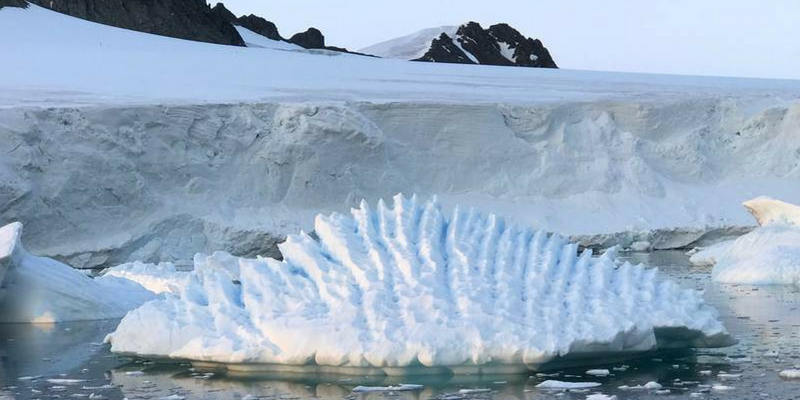 Ice losses from Antarctica have increased global sea levels by 7.6 mm since 1992, with two fifths of this rise (3.0 mm) coming in the last five years alone.

The findings are from a major climate assessment known as the Ice Sheet Mass Balance Inter-comparison Exercise (IMBIE), and are published today in Nature. It is the most complete picture of Antarctic ice sheet change to date - 84 scientists from 44 international organisations combined 24 satellite surveys to produce the assessment.

The assessment, led by Professor Andrew Shepherd at the University of Leeds and Dr Erik Ivins at NASA’s Jet Propulsion Laboratory in California, was supported by the European Space Agency (ESA) and the US National Aeronautics and Space Administration (NASA).

Antarctica stores enough frozen water to raise global sea level by 58 metres, and knowing how much ice it is losing is key to understanding the impacts of climate change today and in the future.

Professor Shepherd said: “We have long suspected that changes in Earth’s climate will affect the polar ice sheets. Thanks to the satellites our space agencies have launched, we can now track their ice losses and global sea level contribution with confidence.

“According to our analysis, there has been a step increase in ice losses from Antarctica during the past decade, and the continent is causing sea levels to rise faster today than at any time in the past 25 years. This has to be a concern for the governments we trust to protect our coastal cities and communities.”

Dr Ivins said: “The added duration of the observing period, the larger pool of participants, various refinements in our observing capability and an improved ability to assess both inherent and interpretive uncertainties, each contribute to making this the most robust study of ice mass balance of Antarctica to date.”

The threefold increase in ice loss from the continent as a whole is a combination of glacier speedup in West Antarctica and at the Antarctic Peninsula, and reduced growth of the ice sheet in East Antarctica.

At the northern tip of the continent, ice shelf collapse at the Antarctic Peninsula has driven a 25 billion tonne per year increase in ice loss since the early 2000s.

The East Antarctic ice sheet has remained close to a state of balance over the past 25 years, gaining just 5 billion tonnes of ice per year on average.

Josef Aschbacher, ESA’s Director of Earth Observation Programmes, said: “CryoSat and Sentinel-1 are clearly making an essential contribution to understanding how ice sheets are responding to climate change and affecting sea level, which is a major concern.

“While these impressive results demonstrate our commitment to climate research through efforts such as our Climate Change Initiative and scientific data exploitation activities, they also show what can be achieved by working with our NASA colleagues. Looking to the future, however, it is important that we have satellites to continue measuring Earth’s ice to maintain the ice-sheet climate data record.”

Isabella Velicogna, professor of Earth system science, University of California, Irvine, and senior research scientist at NASA’s Jet Propulsion Laboratory, said: “Gravity measurements from the joint NASA and German Aerospace Center (DLR) GRACE mission help us track the loss of ice mass in the polar regions and impacts on sea level at points around the planet. The data from these spacecraft show us not only that a problem exists but that it is growing in severity with each passing year.”

Eric Rignot, professor of Earth system science, University of California, Irvine, and senior research scientist at NASA’s Jet Propulsion Laboratory, said: "Measurements collected by radar satellites and Landsat over the years have documented glacier changes around Antarctica at an amazing level of precision, so that we have now a very detailed and thorough understanding of the rapid changes in ice flow taking place in Antarctica and how they raise sea level worldwide."

Benjamin Smith, senior principal investigator, University of Washington Applied Physics Lab, said: "We're at a really exciting time in Antarctic glaciology, in that we have a lot of mature technologies for measuring ice-sheet changes that were not available when I started in the field in the early 2000s.

“The IMBIE-2 work shows that these have come together just in time to let us watch some really important changes in the West Antarctic Ice Sheet and in the Peninsula. Over the next few years we're going to see some more types of data, from ICESat-2, GRACE-FO, and NISAR, that should let us keep watching Antarctica change in even finer detail."

Dr Pippa Whitehouse, NERC Independent Research Fellow at Durham University, said: “Satellites have given us an amazing, continent-wide picture of how Antarctica is changing. The length of the satellite record now makes it possible for us to identify regions that have been undergoing sustained ice loss for over a decade.

“The next piece of the puzzle is to understand the processes driving this change. To do this, we need to keep watching the ice sheet closely, but we also need to look back in time and try to understand how the ice sheet responded to past climate change.”

Michiel van den Broeke, professor of polar meteorology at Utrecht University, said: “To enhance the interpretation of ice sheet mass changes as observed by satellites requires accurate modelling of the amount of snowfall on the ice sheet, something that cannot be reliably measured from space yet.