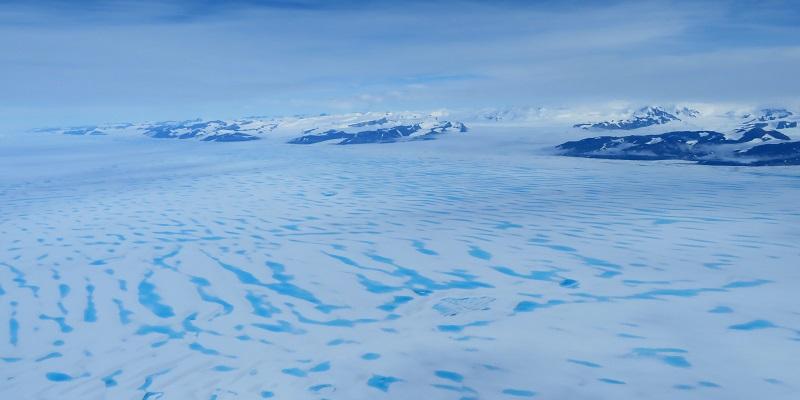 Seven areas of fast-flowing ice on the Antarctic Peninsula have been formally named after Earth observation satellites, following a request by a University of Leeds scientist.

Dramatic changes in the shape of the Antarctic ice sheet have become emblematic of the climate crisis. Reports of iceberg calving, changes in ice-sheet speed, thickness and mass have informed the climate change debate, and are largely thanks to routine monitoring by an international fleet of Earth observation satellites.

Recognising the importance of observations from space, the UK Antarctic Place-names Committee has approved seven new names for international use.

The decision follows a request by Dr Anna Hogg from the Centre for Polar Observation and Modelling at the University of Leeds, who identified that the major glaciers flowing westwards from the Dyer Plateau on the Antarctic Peninsula are thinning and flowing at rates of more than 1.5 metres a day.

Naming the glaciers after the Earth observation satellites we use to measure them is a great way to celebrate the international collaboration in space, and on big science questions.

Dr Hogg is an expert in Earth observation of the polar regions and uses satellite data to study the remote Antarctic and Greenland Ice Sheets. Her research published in 2017, which identified the thinning of the Dyer Plateau and linked the increased ice flow in Western Palmer Land to ocean melting, would not have been possible without satellite observations.

In deference to the critical role that satellites play in measuring and monitoring Antarctic glaciology, Dr Hogg requested that seven glaciers monitored in her study be named after the satellites.

The names will be added to the British Antarctic Territory Gazetteer and will be available for use on all maps, charts and in all future publications.

Dr Hogg, who is also a part of the School of Earth and Environment, said: “Naming the glaciers after the Earth observation satellites we use to measure them is a great way to celebrate the international collaboration in space, and on big science questions.

“Satellite observations provide scientists with information on some of the most inaccessible regions on Earth. Without this data we would have a very unclear picture of how our rapidly changing environment is affecting glaciers around the world.

"The European Space Agency satellite missions allow us not only to understand the changes that are taking place in the fastest warming region on the planet but give us the means to predict what could happen to this region in the future.

“It’s fantastic news that the Government of the British Antarctic Territory have formally approved these new place names, which will be on the record forever more.”

The Ers Ice Stream that flows west between Jensen Nunataks and Gunn Peaks was named after the two European Space Agency (ESA) satellites – ERS-1 and ERS-2 – that operated between 1991 and 2011. They provided the first high-resolution, wide-swath and day-and-night images that were used to calculate the speed and direction of the flow of glacier ice.

The Envisat Ice Stream, lies further to the west and commemorates ESA’s largest Earth observation satellite, which was launched in 2002 and operated until 2012.

The Cryosat Ice Stream flows further west and is named after the ESA Earth Explorer satellite launched in 2010. CryoSat was designed specifically to detect changes in the height of polar ice. Professor Andy Shepherd, from the School of Earth and Environment and CPOM Director is the principal scientific advisor to ESA for this mission.

The Sentinel Ice Stream is named after the more recent series of satellites that ESA develops for the EU’s Copernicus programme to the environment and climate change. This programme provides open access to images, allowing the public to easily view and witness ongoing, year-round changes in Antarctica and the rest of the world.

The ALOS Ice Rumples are named after a Japan Aerospace Exploration Agency mission. Its optical and radar image data acquired between 2006 and 2011 have been used to map ice in the polar regions.

Finally, the Landsat Ice Stream is the most westerly of the newly named glaciers. It is named after the joint NASA/US Geological Survey series of Landsat Earth observation satellites that have been operating since 1972. Landsat has been one of the primary satellite systems used in Antarctic studies, providing over 40 years of uninterrupted mapping of the continent for climate and environment studies.

Fifteen space agencies currently collaborate on coordinating Antarctic data collection from a wide range of satellites, and on the planning of data acquisition and products to address the needs of the scientific community, under the banner of the World Meteorological Organization’s Polar Space Task Group.

This gesture of naming Antarctic glaciers after these ground-breaking satellites is a mark of recognition of the importance of Earth observation data in addressing the climate crisis.

“This gesture of naming Antarctic glaciers after these ground-breaking satellites is a mark of recognition of the importance of Earth observation data in addressing the climate crisis.”

Satellite observations form an integral part of ongoing research for many University of Leeds scientists. The Centre for Polar Observation and Modelling at Leeds recently received over a million pounds in funding from the National Environment Research Council to address key knowledge gaps in quantifying and predicting changes in Earth's land and sea ice cover.