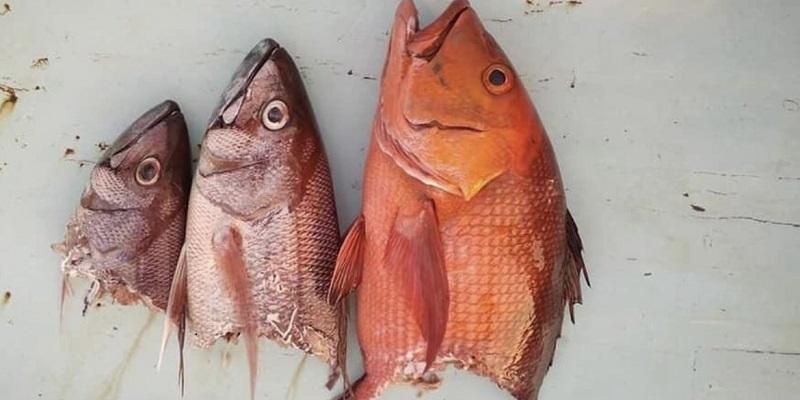 People who make a living fishing off the coral reefs around the Maldives say their daily income is down by almost a quarter due to sharks stealing their catch.

The waters around the Maldives, a collection of islands in the Indian Ocean, were designated a shark sanctuary in 2010 to help conserve shark species which had been in decline, primarily due to overfishing.

Under the rules of the sanctuary, there is a total ban on fishing for sharks. The fishing communities believe the shark population has now “substantially increased”, with the result the sharks are plundering the fish they are catching.

Known as depredation, this process sees sharks not only take the fish that has been caught, but also damage or take fishing equipment and lines.

The top image shows the results of a shark attack on fish catch.

Sharks could have learnt to associate the presence of boats with food - described as “associative foraging” - and so congregate in those areas where the boats fish.

Writing in the journal Conservation Letters, a team of biologists - from the University of Leeds and University of Newcastle, and from the Maldives - report that the people who fish around the coral reefs are coming into conflict with the sharks because of a complex interplay of factors, and not just because shark numbers have rebounded.

In recent years, there has been an increase in demand for reef fish from domestic markets in the Maldives and from tourists, and the researchers say the coral fisheries are getting close to being over-exploited.

The result is increased competition between the sharks and the fishing communities for dwindling fish stocks.

This latest study is one of the first investigations to try and understand the views of local fishing people in the Maldives to shark depredation.

For  people who fish around the reefs, the income loss was around 21% of daily earnings. There is also a decline in support among the fishing communities for the shark sanctuary.

To resolve potential problems, the researchers argue for policies that better balance the needs of the fishing communities while at the same time promoting sustainable shark conservation.

Professor Selina Stead, marine biologist and Executive Dean at the University of Leeds’ Faculty of Environment, supervised the study. She said: “Shark and human conflict will arise from conservation efforts unless we balance food security and biodiversity conservation to provide food and income for future generations.

“We show how vulnerable coastal communities in the Maldives are feeling threatened by sanctuaries designed to protect sharks. As these predator numbers grow, sharks are attacking dwindling fish catches that fishers depend on for income. We advise inclusive engagement with fishers is the best way to win their support for sanctuary regulations.

“Wider consideration of trade-offs between conservation benefits and sustainable livelihoods will improve sustainable management of sharks.”

As part of the research, underwater cameras were used to estimate relative shark abundance at perceived shark hotspots and control sites identified by fishers.

Dr Danielle Robinson, a marine social scientist at the University of Newcastle and lead author in the study, said: “The study highlights the importance of more inclusive approaches to help us understand and managed depredation conflicts.

“Research and conservation policies tend to focus on commercial fisheries due to their economic value, yet our findings highlight the urgent need to consider and manage perceptions of small-scale fisheries when developing policy.”

The paper, “Fisher–shark interactions: A loss of support for the Maldives shark sanctuary from reef fishers whose livelihoods are affected by shark depredation”, can be downloaded from Conservation Letters.

The top image shows the damage down to catch as a result of shark depredation. Credit: Dr Danielle Robinson.

For more details, please contact David Lewis in the University of Leeds press office via d.lewis@leeds.ac.uk.