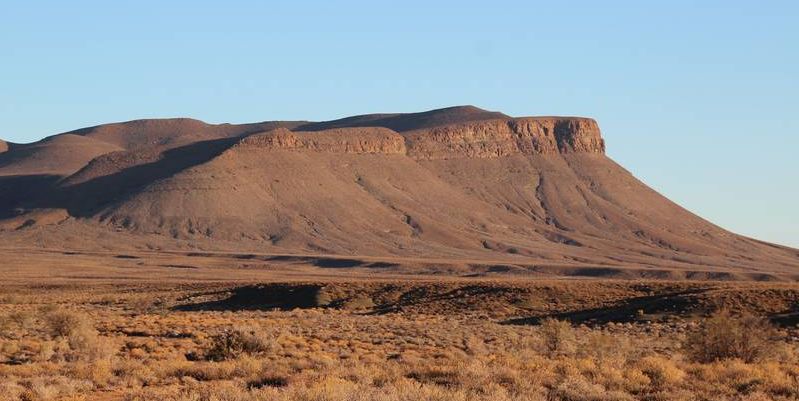 A team of scientists from the University of Leeds and the National Oceanography Centre examined remains of deep-sea burrows in rocky outcrops that were part of the ocean floor roughly 250 million years ago.

These outcrops are made up of sand-sheets that are widespread on modern ocean floors, suggesting that deep-sea burrowing marine life may be much more abundant than previously considered.

Study author Professor David Hodgson, from the School of Earth and Environment at Leeds, said: “Ocean ecology shows us that deep-sea burrowers have only become more prevalent and diverse through time.

“Their adaptability to new environments strengthens the idea that if their pre-historic ancestors were burrowing to these depths, then it’s likely we’d find them there today.”

Collecting intact samples from the deep-ocean floor is technologically challenging. The distance to the ocean seabed and the difficulties of extracting samples makes it problematic to determine how deeply modern animals burrow. Modern deep-sea biological studies target muds as these are simpler to sample than the shifting sands of the deep seabed.

Lead author Dr Sarah Cobain conducted this research while a PhD student at the School of Earth and Environment, she is now based at Petrotechnical Data Systems in London. She said: “These outcrops give us a snapshot of ancient deep-sea life. We know that modern marine burrowing animals are living in the same material that has been fossilised in these rocks.

“The burrowers use the networks that are already present in the deep ocean sediment below the seabed and leave behind living traces. These networks — what we call injectites after they've been fossilised — are caused by sand-rich water being forcibly injected into mud. They provide the animals easy pathways to burrow and find nutrients and oxygen.

“Our understanding of the process by which these injectites form allows us to not only assess how these creatures lived but also how deeply they burrowed into the sediment below the seabed.”

The branching structures that make up the trace fossils are believed to have been made by organisms that were previously thought to live mainly in the top 20 centimetres of sediment, rarely reaching further than 1.5 metres, due to the decline of oxygen and food in deeper levels of the sediment.

The team documented the creatures’ living traces — known as bioturbation — on the margins of clastic injectites from at least eight metres below the seabed.

In order to produce living traces, organisms would need to survive long enough to burrow for hours or even days. The size of the burrows suggests macro-infaunal invertebrates (tiny shrimps and worms).

Study author, Jeffrey Peakall, Professor of Process Sedimentology at Leeds, said: “This discovery gives us a window into a widespread yet barely explored environment on our planet. Little is known about modern deep seabed environments, and less about the ancient.

“These trace fossils can give us new insight into the possibility that the deepest organisms may be present in sandy sediments, rather than the clays and silts typically targeted in modern seabed investigations.”

For additional information and to request interviews please contact the press officer at the University of Leeds, on +44(0)113 343 4031 or pressoffice(at)leeds.ac.uk

We are a top ten university for research and impact power in the UK, according to the 2014 Research Excellence Framework, and are in the top 100 for academic reputation in the QS World University Rankings 2018. Additionally, the University was awarded a Gold rating by the Government’s Teaching Excellence Framework in 2017, recognising its ‘consistently outstanding’ teaching and learning provision. Twenty-four of our academics have been awarded National Teaching Fellowships – more than any other institution in England, Northern Ireland and Wales – reflecting the excellence of our teaching. www.leeds.ac.uk