School of Earth and Environment news Monday 15 May 2017 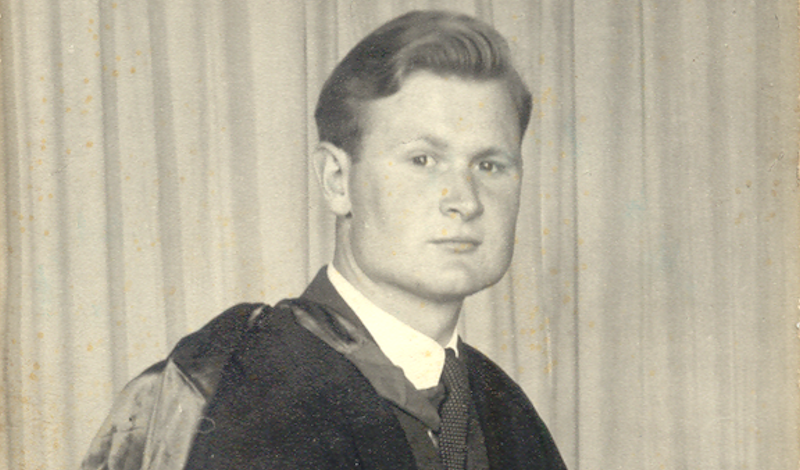 On Tuesday 21 September 1948, only two or three weeks before the start of term, he was offered a place at the University of Leeds in the Honours School of Geology, having had refusals from the University of Liverpool and the University of Leeds Chemistry departments. He received a maximum grant from the Local Education Committee which was £180 a year. This covered lodgings and maintenance but not fees, which were paid separately by the local authority. At the end of September he went up by train to Leeds and fixed up lodgings in a house in Chandos Place near Lidgett Lane, not far from Roundhay Park. This first house share was not all it was cracked up to be, as a diary entry from 1949 reveals:

"Things got worse and worse at the digs when I went back to Leeds for the beginning of the Easter Term. The two maidens, the Misses Auty became insufferable. To start with they didn't like us leaving the light on and reading or writing in our bedrooms at night. I was told off once for writing in my bedroom, "at 10.45 p.m.". On another occasion I remember reading in bed and the door opening and a hand coming round the door and turning the light off, and as a final straw, they started to turn the electricity off at the mains at 11.00 p.m. so that we couldn't read after that time. The chap that was with me in the digs, Alwyn Williams, was having constant arguments about this sort of thing with the landladies and it finished up with one of them slapping his face. So we resolved to start looking round for new digs almost immediately. We tried for the University halls of residence but that wasn't successful so eventually we found a place a bit nearer the University at 125 Spencer Place in Chapeltown and did a flit one Saturday, taking a taxi to our new digs. One big advantage was that you could walk to the University; it took about twenty-five minutes."

In his second year at Leeds, Keith moved from digs to Woodsley Hall (now known as Fairbairn House), right next to campus.

There were only 3 schoolboys on the first year of his Geology course - the others were all ex-servicemen. During his first year he went on many Saturday geological field trips, the first of which was to Robin Hood's quarry between Leeds and Wakefield with exposures of coal, sandstone and shale. He graduated with honours in July 1951 with a BSc in Geology. The same year he was elected a Fellow of the Geological Society of London.

In August 1951, Keith was appointed as a Geologist at the Geological Survey of Nyasaland (now Malawi). He set sail from Liverpool for Africa on 11 December 1951. Keith's responsibilities were varied and included: regional geological mapping of Precambrian rocks and Mezosoic plutons; economic surveys; radiometric surveys; the location of groundwater; engineering geology consultations; as well as his own research into the alkaline rocks of the country. His first scientific paper was published in 1954 in the Transactions of the Royal Society of South Africa, although he had previously published chapters with the Geological Survey of Nyasaland in 1953, detailing the geology of the Zomba and the Majete areas. In 1955 Keith met Norma, an Argentinian nurse working at the Royal Marsden Hospital, whilst he was on leave in the UK. After a whirlwind romance Keith returned to Malawi and Norma to Argentina. On 24th March 1956 they were reunited and married in The Scots Presbyterian Church in Zomba, Malawi. Their children, Margaret and Derek were born in Zomba in 1957 and 1958 respectively. In 1956, he completed his MSc thesis, submitted to the University of Leeds, entitled: "The geology of the Port Herald Hill, southern Nyasaland". He returned briefly to Leeds from 1962-1963, and submitted his Ph.D. thesis entitled: "The petrology of the Basement Complex in part of southern Nyasaland with particular reference to the infracrustal rocks" in 1964. His thesis can still be found at the University of Leeds in the School of Earth and Environment.

Following his doctoral defence, Keith was promoted to Principal Geologist at the Geological Survey of Malawi in 1964. Under this position, he had joint executive control of all the geological activities of the Geological Survey, and was responsible for the supervision of up to 10 mapping parties. Under his supervision, the Geological Survey published the first 1:1 million Geological Map of Malawi, and he published his first paper in Nature: "A major east-north-east dislocation zone in Central Malawi" in 1966. He is credited with being "the only geologist, who has been able to extend survey operation across Malawi from the Eastern border - at Lake Chirwa shore - right across Southern Malawi to the country's western boundary on the Kirk Plateau. ... Your departure will create a virtual void of a person extremely essential to the country, very useful and indispensable to the department, and also friendly to individuals", in a letter written to Keith by Junior Staff of the Geological Survey Department, Malawi, in December 1966. 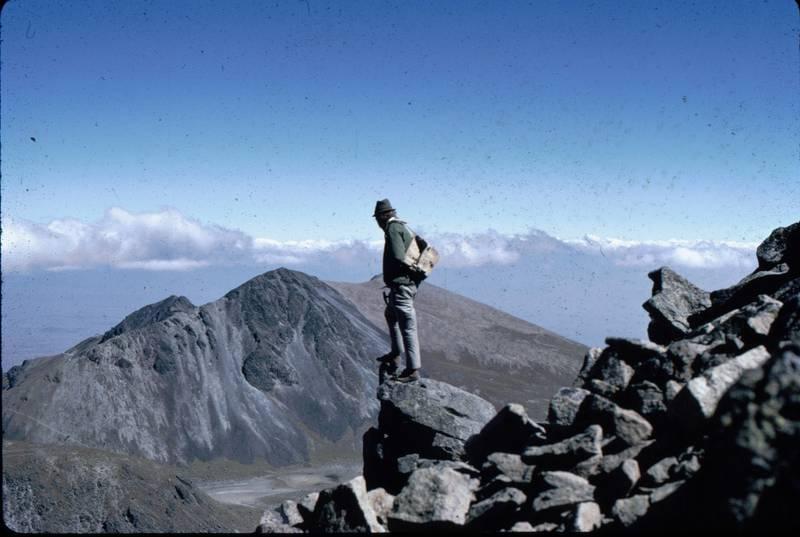 From June to December 1967, Keith worked as a consultant hydrogeologist for the Government of Zambia. In 1968, he was appointed Principal Scientific Officer for the Overseas Division at the Institute of Geological Sciences (IGS, now BGS). This, however, did not signify a move home! He worked in southern Sudan (1968); Uganda (1968-1970); and Oman, Brazil and Bolivia (1974-1975). His time at the University of Mexico (1971-1973), as an advisor in Petrology and Mineralogy, included the supervision of 12 post graduate students, as well as the set up of a new Volcanic Studies Group, which is still active. It was here that he published a number of very influential scientific papers on Nevado de Toluca volcano in Central Mexico, including a number in Spanish, as well as his most cited paper "A late-Quaternay monogentic volcano field in central Mexico" in Geologische Rundschau in 1975. He was appointed a Fellow of the Institute of Mining and Metallurgy in 1970.

From 1976-1979 Keith was the Chief Geologist for the Overseas Division of the IGS in Eastern Bolivia. The mineral exploration project employed 10 staff from the IGS, and 15 Bolivian geologists. The geological survey and mineral exploration project covered an area of approximately 220,000 square km of the Precambrian shield in eastern Bolivia. Dr David Bleakley, a colleague at BGS in London, commented on his work in Bolivia in 1979 as "your drive, scientific, systematic approach and the manner in which you have carried the staff with you in conducting it (geological surveys of eastern Boliva) have, in fact, been little short of exemplary". From 1980-1983 Keith acted for the IGS as a Regional Geologist in the Caribbean; Latin America; and Central and Southern Africa. In 1983, aged 53, and having spent over 30 years abroad, Keith returned to the UK, where he became the Deputy Chief Scientific Officer as the Head of the Overseas Division of the IGS, until his retirement in December 1988.

In April 2015, Keith visited the School of Earth and Environment at the University of Leeds for the first time in over 40 years, meeting current staff and students, as well as being reunited with his Ph.D. thesis and a number of thin sections which he created in the 1960s. I am privileged to say that I was at that meeting. He was a wonderful man, both academically and personally, and truly a remarkable inspiration to young people, especially geologists like myself. He will be dearly missed.

Keith is survived by his wife Norma, their two children; Margaret and Derek, and four grandchildren; Amy, James, Tom and Isabelle.

A Memorial Service is to be held to celebrate the life of Keith on Thursday 29th June at St Peter & St Paul Church in Uppingham, Rutland at 11:30am.