Formation of gypsum could tell us about water on Mars 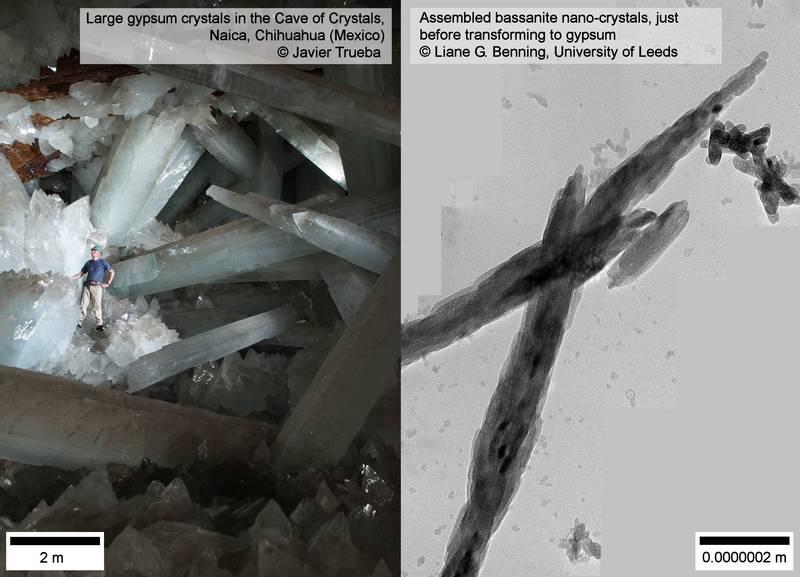 A new explanation on how gypsum grows from ions in solutions has been reported in Nature Communications.

Gypsum is an abundant, naturally occurring mineral and it is extensively used as the construction material Plaster of Paris.  It a global production of ~100 billion kg per year and is also found on the surface of Mars. This new knowledge could lead to a significant change in the way we process an important building material, as well as allow us to interpret past water availability on other planets such as Mars.

The formation of gypsum, from concentrated aqueous solutions of calcium sulfate, had previously thought be a single-step process. However, a group of geochemists, including School of Earth Environment members Dr. Tomasz Stawski and Prof. Liane G. Benning, have now shown that gypsum forms through a complex 4-step process.

The team examined the process using in situ and time resolved synchrotron-based X-ray scattering at Diamond Light Source (Harwell, UK) and they identified and quantified each step of the formation process. It was highlighted that the initial moments in the reaction chain are of particular importance, as they determine the final properties of gypsum.

Previous attempts to understand gypsum formation depended on sampling from the solutions in which the mineral was formed and drying, so it was never clear if what we were seeing was an artefact of the process.

In this 1st step, tiny sub-3 nm elongated particles form the primary building blocks. In subsequent steps these blocks cumulate, self-assemble and rearrange themselves, to finally transform to gypsum crystals.

As quoted by the European Association of Geochemistry, the lead author, Dr. Tomasz Stawski (University of Leeds and GFZ, Potsdam) stated, “Importantly, we envisage that it is possible to alter this pathway by specifically targeting individual stages. For example we could arrest the reaction at the first stage when only nano-bricks are formed, and thus directly synthesise a highly reactive precursor to Plaster of Paris” This new understanding of the process opens the way to more energy efficient production of plaster, which is normally produced by the energy-intensive heating of gypsum, therefore reducing costs and carbon emissions of the industry.

“This is a multi-billion dollar industry, but basic geochemistry behind the fundamental process has not been understood. Previous attempts to understand gypsum formation depended on sampling from the solutions in which the mineral was formed and drying, so it was never clear if what we were seeing was an artefact of the process. It’s like looking at an ancient mummy, you see the results of the drying process, but that gives you no real understanding of the recently-dead pharaoh they started out with. Now we have a clear idea of the process”.

The senior author of the study, Prof. Liane Benning (University of Leeds and GFZ, Potsdam) highlights that:

“We know that gypsum is naturally found on Mars, so applying our current finding will also help us understand and predict the hydrological conditions at the time of gypsum formation on other planets”.