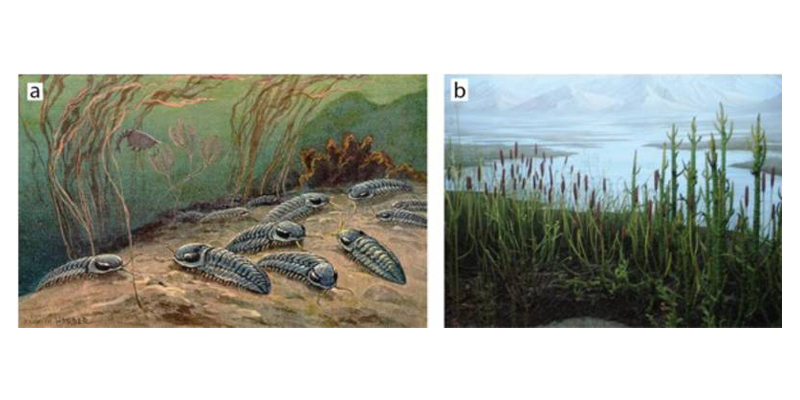 Some 520-540 million years ago, animals began to inhabit the seafloor, and this drastically changed the global environment.

Their presence in the seabed stimulated the breakdown of organic material, which released carbon dioxide and decreased atmospheric oxygen levels. In the 100 million years that followed, living conditions for these earliest animals became much harsher, as the ocean became low in oxygen, while high CO2 levels led to global warming. These results have recently been published in Nature Communications by researchers from the University of Leeds, in collaboration with researchers from the Vrije Universiteit Brussel, the University of Antwerp, and Exeter University.

Every gardener knows that earthworms are important for gardens, as their movement helps drain and aerate the soil. They also stimulate the recycling of dead organic material, which releases essential nutrients that help plants grow. All these processes that disturb and mix the soil are collectively known as bioturbation. This is very similar to what happens in the sediment covering the ocean floor, which is inhabited by a variety of bioturbators, such as marine worms and other animals. When animals are present in the sediment, more organic material is recycled, and the sediment becomes more aerated. ‘You can compare it to burning fuel’ explains Prof. Filip Meysman, one of the senior authors of the study, ‘If there are worms present in the sediment, or soil, the breakdown of organic material is much more complete, and more oxygen is consumed, while more carbon dioxide is produced.’

Because the effect of bioturbation is so large, scientists have hypothesized that dramatic changes in the Earth’s environment may have occurred when the whole ocean floor changed from an undisturbed state to a bioturbated state. Such a transition occurred early in the Cambrian Period (around 520 million years ago), when atmospheric oxygen levels increased to near-modern values, leading to the ‘Cambrian explosion’ of animal life. These early animals rapidly colonized the seafloor, causing a transition from an undisturbed seafloor to a bioturbated seafloor. ‘We do indeed see a decrease in oxygen levels in the ocean around 520 million years ago’ explains Prof. Simon Poulton, a senior author of the paper from the University of Leeds, ‘the problem is that evidence from the rock record shows that the sediment was only a little disturbed. This means that the animals living on the seafloor at that time did not move very deep into the seabed. At first sight, these two observations might not seem to add up’.

First author Dr. Sebastiaan van de Velde, who led the development of the research while on a placement at the University of Leeds as a PhD student, continues ‘The critical factor was to realize that the biggest changes happen at the lowest levels of animal activity and size. This means that the first bioturbators had a massive impact on the Earth system.’

This realization was the missing piece of the puzzle, and it allowed the researchers to construct a mathematical model of the Earth around that time to look to the changes caused by the advent of shallow bioturbation. Dr. Benjamin Mills, who led this part of the research, explains ‘When we ran our model, we were surprised by what we saw. The evolution of these small animals could indeed decrease the oxygen content in the ocean and atmosphere, but the worldwide oxidation of organic matter also increased atmospheric carbon dioxide levels and caused severe global warming. We knew that warming occurred at this point in Earth history, but did not realize it could be driven by animals’.

Perhaps ironically, the lifestyle of the early animals increased the environmental stress on themselves, which possibly contributed to a number of mass extinction events that occurred during the first 100 million years of animal evolution. Co-author Prof. Tim Lenton from the University of Exeter notes ‘There is an interesting parallel between the earliest animals changing their world in a way that was bad for them, and what we human animals are doing to the planet now. We are creating a hotter world with expanding ocean anoxia which is bad for us and a lot of other creatures we share the planet with.’

The paper ‘Early Palaoezoic ocean anoxia and global warming driven by the evolution of shallow burrowing’ is published in Nature Communications, online at https://www.nature.com/ncomms/.