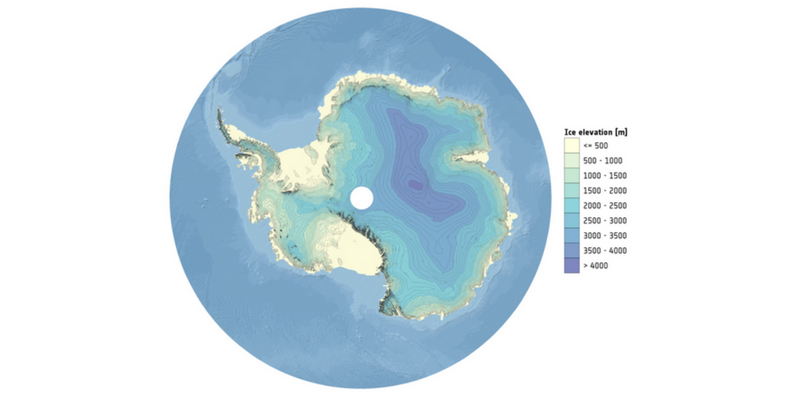 A new map of Antarctica, available to download from today, is providing the most accurate three-dimensional view of the continent to date.

This latest digital elevation model (DEM), developed by the UK Centre for Polar Observation and Modelling (CPOM) and the result of research published today in The Cryosphere, replaces the beta version launched in March 2017.

Over the past year, CPOM researchers have refined and improved the DEM, which is based on satellite measurements from ESA’s CryoSat-2 mission, to give an even more detailed picture of Antarctica’s ice sheets and floating ice shelves.

Lead researcher Tom Slater explained: “Our new model has several advantages over the previous one.  It covers 350,000 km2 more of the continent’s surface area, and the resolution is now twice as high, sampling the ice sheet surface every kilometre.”

Around 250 [e1] million measurements taken by CryoSat’s radar altimeter between July 2010 and July 2016, including 5 million more than the beta version, were used to create the model, which now gives a snapshot of ice elevation across 95% of the continent – a 3% increase on the 2017 version.

More sophisticated calculations were also used to fill in gaps that CryoSat could not survey, mostly due to the rugged terrain.

By comparing the model with precise airborne survey data from NASA’s Operation IceBridge, the team show that the new DEM measured ice elevation to within 9.5m on average[e2] , making it more accurate than the previously released beta, and the most accurate yet.

The model is freely available via the CPOM portal, alongside information on sea ice, ice velocity and ice sheets, making it accessible to anyone interested in Antarctic landscape and topography.

CPOM Director Andy Shepherd added: “This model will be useful to anybody wanting to know about the continent’s surface, whether they are planning scientific fieldwork, or modelling the ice sheet’s future behaviour and potential sea level contribution.”