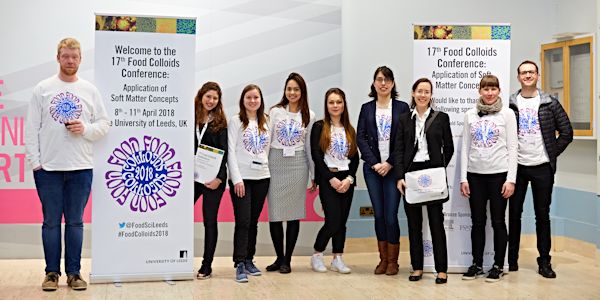 The biennial conference saw an estimated 300 delegates from 30 nations across the world attend the University of Leeds to expand and exchange knowledge in Food Colloids.

The event began at the iconic Parkinson Building at the University of Leeds on the 8th April and ended with a York sightseeing experience followed by a conference dinner at the National Railway Museum on the 11th April. Food Colloids is a highly interdisciplinary science dealing with the physical chemistry of food. The purpose of the conference was to expand and exchange knowledge of state-of-the-art science and recent research advancements in Food Colloids, with this year’s theme being the application of Soft Matter Concepts.

2018 Food Colloids Conference at the University of Leeds, Parkinson Court.

Founded in 1986 in Leeds, the conference has since been held in many destinations across the globe, including Sweden, France and Spain. It now returns to the UK for the first time in 14 years, last being held in Harrogate in 2004. The School of Food and Nutrition, alongside MEETinLEEDS, successfully won the bid to bring the conference back to Leeds at the 16th Food Colloids conference, which was held in the Netherlands.

This April’s conference included five key themes, led by keynote speakers, which included interfacial design; relating structure to properties; colloidal aspects of eating and digestion; biopolymer interactions and processing of novel structures of functionality. There was a 43 oral presentations, two technical talks, and exhibitions of scientific equipment. The conference was supported by two leading scientific journals, Colloids and Surface A: Physicochemical and Engineering Aspects published by Elsevier and Food & Function published by the Royal Society of Chemistry, and a range of well-known brands from Nestle Research to Arla also attended.

Leeds’s extreme strength in the Food Colloids sector helped our School and MEETinLEEDS win the bid, with the city being home to the biggest Food Colloids and Processing academic group in Europe. The Food Colloids Group at the University of Leeds is internationally acclaimed for its interdisciplinary research worldwide, ranked first in Europe and third in the World according to field-weighted citation impact in Food Colloids, making it an ideal location for the conference destination.

Dr Anwesha Sarkar, Associate Professor of Food Colloids at the School of Food Science & Nutrition at the University of Leeds, commented:

“We are excited to be returning to Leeds for the 17th year of the Food Colloids Conference. We hope to leave a legacy with this conference, to leave delegates not only excited but curious about Food Colloids research moving forwards.

“The event also offers the ideal environment for networking between a broad range of industrial and academic experts, from students beginning their career to pioneers in the field. Delegates from across the globe will gather to generate new ideas and aim to provoke scientific advancement.”

“Attracting such a high profile conference is demonstrative of not only the success of the work in our School of Food and Nutrition but also the conference offer on the University of Leeds’s campus.

“Working in tandem with our academic colleagues in Food and Nutrition we very much look forward to showcasing our venues alongside the great things presented by colleagues across the discipline – from Leeds and internationally across the globe.”