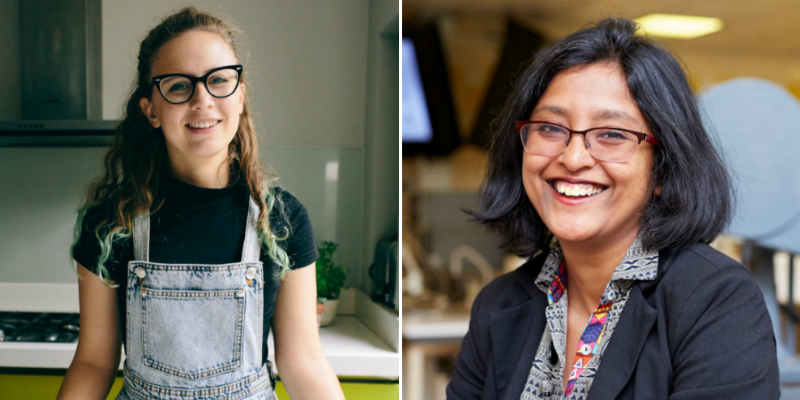 Food Science and Nutrition student Izy Hossack, and Associate Professor of Food Colloids Dr Anwesha Sarkar have been recognised by the Women of Achievement Roll of Honour 2018.

Held for the fifth time, the Awards are a key part of the University’s Leeds Gender Framework. They celebrate the significant contributions and impact that the winners have made across the University and beyond. The women receiving awards were all nominated by their peers, and represent academic and professional staff, as well as students, and are drawn from across the University. Along with the winners, the judging panel selected five further female colleagues to appear on the Women of Achievement Roll of Honour:

Dr Anwesha Sarkar, Associate Professor of Food Colloids, School of Food Science and Nutrition
Recognised for her contributions to the field of oral processing. In 2017 she was awarded €1.3m by the European Research Council.

All eight of the University’s faculties were represented in the Awards, as was the Leeds Doctoral College and professional services such as Educational Engagement, Sustainability Services, and Strategy and Planning, showing how excellence is being achieved throughout the institution.

The winners are as follows:

Professor Fiona Meldrum, School of Chemistry - Awarded the 2017 Interdisciplinary Prize of the Royal Society of Chemistry

Professor Jane Nixon, Leeds Institute of Clinical Trials Research, Faculty of Medicine and Health - Made a Member of the Order of the British Empire (MBE) for services to health research (2017)

Lenka Vráblíková, School of Fine Art, History of Art and Cultural Studies - After her leading role in organising the international ‘Feminist Readings’ conference at the University in 2016, Lenka helped to secure funding for the ‘Feminist Readings Network’ from the Gender and Education Association.

Louise Banahene, Head of Educational Engagement - Awarded an MBE in the New Year's Honours (2018) list for her services to Higher Education

Professor Wändi Bruine de Bruin, Centre for Decision Research, Leeds University Business School - Made Fellow of the Psychonomic Society (US), made Fellow of the Network for Studies on Pensions, Aging, and Retirement (NETSPAR).

The Awards were hosted by Professor Lisa Roberts, Deputy Vice-Chancellor: Research and Innovation. Alumna and Chief Executive of the Southbank Centre, Elaine Bedell, gave a keynote speech and presented the winners with their award certificates.

Portrait photographs of the award winners will shortly be installed as part of a permanent exhibition in Parkinson Court. The images of this year’s winners will join those of the 50 women recognised in previous Women of Achievement Awards, helping to create an enduring showcase celebrating the University’s talented and remarkable women, and providing exemplary female role models to inspire other staff and students in their career development.