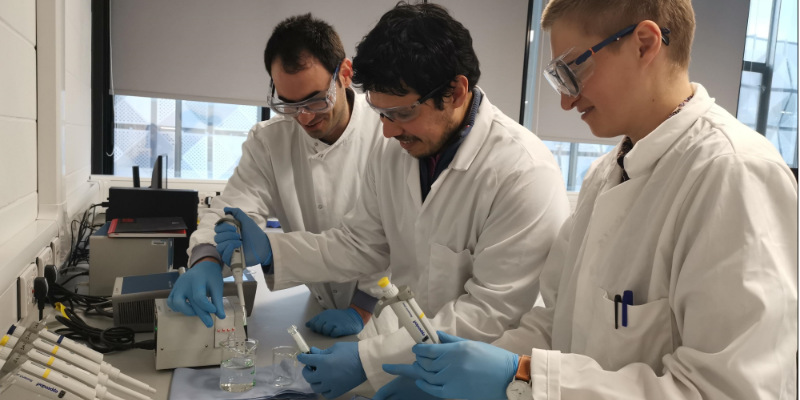 The team behind the project included academics from a variety of disciplines including Physics, Material Science and Psychology, all currently working in the School of Food Science and Nutrition.

The LubSat research project aims to create a breakthrough in the fundamental understanding of oral lubrication mechanisms to establish design principles for developing the next generation of satiety-targeted foods i.e. foods that make you ‘fuller for longer’.

Food is a complex soft material that mixes with the bio-lubricantsaliva and food-saliva mixture undergoes transformations in the mouth at multiple length- and time-scales that can have important consequences on appetite suppression, which remains poorly understood. Which food gives more satiety – the ‘sticky’ one or the ‘slippery’ one? Can we measure this ‘slipperiness’ or ‘stickiness’, in other words the friction forces generated in the mouth that cause such oral sensations?

Although Leonardo da Vinci stated the ‘laws of sliding friction’ in late 15th century, oral friction1 measurements suffer from severe technical deficiencies due to lack of appropriate surfaces that can mimic soft lubricious oral surfaces, such as tongue and palate. The multidisciplinary LubSat team are motivated to design bio-inspired human tongue surfaces to accurately measure how food molecules lubricate at macro- to nano-scale through innovative instrument development and clearly lay out the implications of oral lubricity on the psychological aspects of perceived satiety. Therefore, for solving such a multi-faceted scientific problem, interdisciplinary research team is quintessential I LubSat Project that will use experimental approaches that range from devising new instrumental set ups to validation using human trials.

The research team behind this innovative work:

Dr Efren Andablo Reyes: Efren’s background is in Physics, graduating with a PhD from the University of Granada, Spain for studies related to the rheology and tribology of colloidal magnetic fluids. In his current position as a postdoctoral research fellow in LubSat Project, he aims to build bio-inspired tongue-palate system at macro-scale. The novel instrumental set up currently being developed by him in collaborations with academics in Schools of Dentistry and Mechanical Engineering will help in establishing the soft lubrication mechanisms in human oral mucosa.

Dr Evangelos Liamas: Evangelos is a biomaterial scientist, coming from Chemical Engineering discipline; he obtained his PhD from the University of Birmingham studying the interactions between proteins and biomaterials, and the impact of protein adsorption at sliding interfaces. In his current postdoctoral research fellow position, he aims to accurately measure frictional force and adhesion at the interface of soft biological tissue and biomimetic polymers, in order to achieve fundamental understanding of oral lubrication at the nano-scale. He collaborates with academics in School of Physics and Astronomy to tailoring friction force microscopy technique for soft materials.

Ecaterina Stribitcaia: Ecaterina graduated with MSc in Health Psychology from Coventry University. She is currently a PhD Student working in LubSat Project working closely with academic’s in school of Psychology, to understand the influence of oral lubrication on satiation and satiety. Her work will involve designing model hydrogels with targeted macro- and nano-scale lubrication properties and testing their physiological and physiological consequences of consuming these gels on appetite suppression using a series of human interventions.