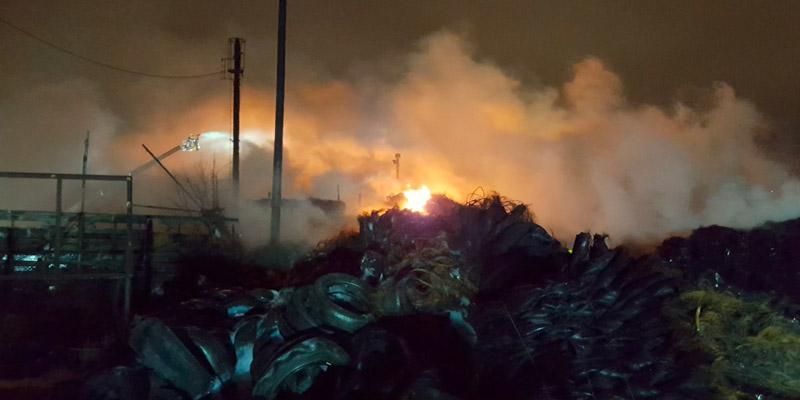 Smoke from fire will impact those with respiratory conditions, according to a University of Leeds researcher.

A Leeds scientist says pollution from the huge tyre fire in Bradford is worse than Bonfire Night and that it will affect people with breathing difficulties.

The fire, which saw rail lines, roads, schools and businesses closed, was so large that smoke reached as far as Leeds.

While firefighters tackled the fire, university air quality data scientists were called in by council chiefs to assess air quality. The results were subsequently used by the Environment Agency to give them better understanding of exposure levels and monitoring spots and the overall wellbeing of people working on site.

University of Leeds Associate Professor of Atmospheric Composition Dr Jim McQuaid was asked by Bradford Metropolitan District Council to attend on site on the night of Tuesday November 17.

He said: "It was a bit of a mad scramble to get our pollution sensors to the site, I was surrounded by fire service personnel in breathing apparatus. Burning tyres are renowned for producing a pretty hideous cocktail of toxic chemicals, the smoke from this fire will have an impact on the local communities downwind, especially anyone with underlying respiratory conditions such as asthma.

"We are working with the Born in Bradford project on air pollution exposure in primary school children and this has given me some great contacts in the local community; in fact, after visiting the fire, I placed a sensor in a community leader’s garden to continue monitoring pollution levels."

He added: "I was measuring on the upwind edge of the fire and my levels were similar to bonfire night, but [the other monitoring teams] would have been seeing much higher readings. In fact, I could smell the plume in Leeds on Wednesday afternoon as the wind turned more westerly, what we really need is some heavy rain to damp down this major fire."

Dr Dhaval Thakker, Senior Lecturer in Computer Science in the Faculty of Engineering & Informatics at the University of Bradford, said: “We were given access to the site and were supported by emergency services. We have developed air quality (AQ) kits, which we took to the site and focused on measuring the AQ at three different strategic locations - one quite close to fire (50 feet away, under the smoke and wind), another 0.1 mile away, near the police station but away from wind and smoke, and the third 0.3 miles away but in the line of fire, smoke and wind.”

He added: “It was amazing to see up close the fire and emergency services dealing with what looked like a horrific and unending fire. We also got to see the kindness of Bradford people, as we were able to use the power supply from a nearby car wash.”

The AQ data was shared with the council’s air quality officer and will also be made available to the Environment Agency teams arriving on site.