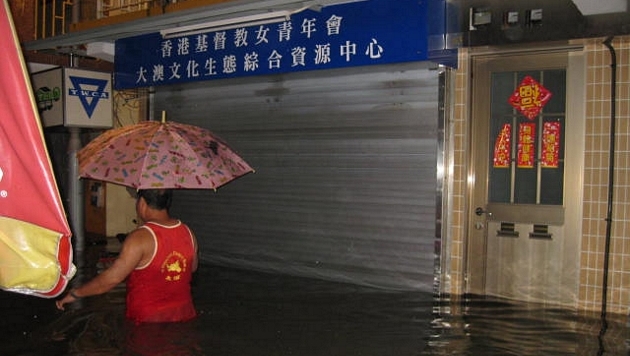 China’s coastal cities have developed rapidly following the adoption of an “open door policy” and have attracted large investment and millions of workers, and are now economic powerhouses in East Asia

However, partly as a consequence of their growth, flood risk in these cities, already high, is rising. Sea level rise and regional changes in climate are exacerbating the risk, with typhoons, sea surges and storms expected to occur more often. PhD student Faith Chan, supervised by Dr Gordon Mitchell and Professor Adrian McDonald, has been investigating flood risk management for these megacities, each home to over 8 million people, and has concluded that better long term, sustainable flood risk management strategies are urgently needed.

The cities’ people and economic assets are exposed to flood risk from the sea, rising rivers and intense urban rainfall.  To investigate how well these flood risks are currently assessed and managed, the research developed a sustainable flood risk appraisal (SFRA) framework, to facilitate benchmarking of flood practice and policy. The work focussed on the Pearl River Delta, particularly its cities of Shenzhen and Hong Kong, with analysis drawing on interviews with a wide range of stakeholders in the region, and on policy and practice reports.

The research revealed that current flood management relies too heavily on traditional engineering approaches, which are unable to combat major flood events. This is confirmed by severe sea surge flooding in Tai O town Hong Kong, and flash flooding in Shenzhen city centre that killed three people and inundated over 100 homes and businesses. The research found major administrative constraints exist, including a relative lack of strategic planning for flood risk mitigation, insufficient co-ordination of the many institutions that have a role in flood risk management, and poor information provision on flood risk that limits practical action on mitigation and which means that no flood insurance is available.

Flood management in the cities is reactive to flood events, and a  more proactive approach, including the integration of land use planning and flood management is recommended. The researchers hope that the SFRA framework can be useful in developing more sustainable flood management practice in China’s vulnerable coastal megacities.