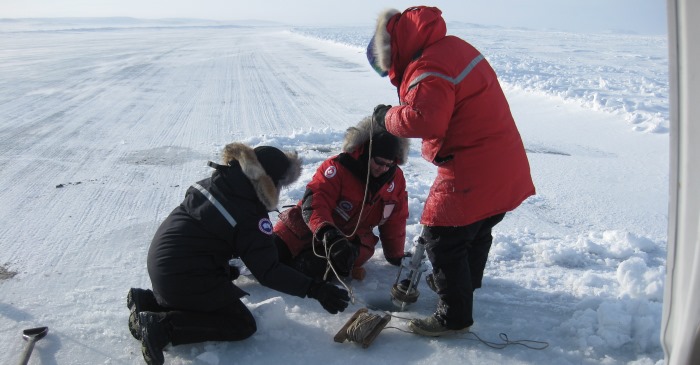 This paper and research is part of a Natural Sciences and Engineering Research Council of Canada (NSERC)-funded project focussing on climate change in the region of the Tibbett to Contwoyto winter ice road (of the ‘Ice Road Truckers’ TV show fame!).

The Tibbitt to Contwoyto Winter Road is a 568-km-long annual ice road first constructed in 1982 to service exploration activities in the Northwest Territories and Nunavut. It is the world's longest heavy haul ice road and critical to the economy of the region and Canada with more than $500 million per year in goods passing over it.

Graeme is currently working with a team from Canada and the UK to use statistically downscaled climate models tested and compared with instrumental and proxy climate data to examine the dynamics of climate change in this sensitive sub-arctic region. Fieldwork in the NWTs in 2010 and 2011 involved sampling lake sediments and water in the tundra as well as south of the treeline. The results suggest a very rapid increase in temperature in the mid-1970s due to the effects of climate change from human-driven emissions and a regime shift of the Pacific Decadal Oscillation (a pattern of change in the Pacific Ocean's climate). The climate models predict pronounced temperature increase in the NWT over the next 100 years.

In addition to researching climate change in the NWT, Graeme is working with the Canadian Geological Survey and the Department of Indian Affairs and Northern Development to research severely polluted lakes and wetlands in the area around Yellowknife. The pollution of these environments is mainly from historic gold mining over the course of the past 200 years. The Giant Mine, for example contains 237,000 tons of arsenic trioxide dust produced during the gold roasting process.

Other environmental threats in subarctic Canada include pollution from historic and present mining activity as well the impacts of climate change. Graeme’s work will contribute towards a better understanding of these challenges and aid local authorities in their planning and remediation responsibilities.

The photo shows Graeme and his colleagues taking samples on the ice road on a day the temperature fell to -35ºC. Additional information about the work on the winter ice road can be found here