Ashar Aslam is a postgraduate researcher on the Centre for Satellite Data in Environmental Science (SENSE CDT). He decided to pursue a PhD in meteorology at Leeds after being introduced to the topic during the final year of his Master’s degree in Earth Sciences at the University of Oxford, following a Met Office Academic Partnership (MOAP) studentship he undertook the summer beforehand.

Ashar is part of the Atmospheric and Cloud Dynamics research group at the Institute of Climate and Atmospheric Science (ICAS) based at the University of Leeds. His principle supervisor is Dr Juliane Schwendike, and his co-supervisors from Leeds are Dr Simon Peatman and Dr Cathryn Birch, from the School of Earth and Environment.

“As a result of my experiences, I knew I wanted to do a PhD linked to tropical meteorology and/or climate model analyses,” said Ashar. “It was quite difficult to find PhDs on African severe weather, which my Master’s project focused on. However, I found this PhD with focus on Southeast Asia  through academics I contacted at Leeds, and given it still had a basis in tropical weather, I felt it was for me.

“I chose Leeds more specifically as I knew through the MOAP that there was a hub here and therefore a strong research group in atmospheric science and meteorology – I guess that’s what brought me here today!”

I chose Leeds more specifically as I knew through the MOAP that there was a hub here and therefore a strong research group in atmospheric science and meteorology...

The support and training provided as part of studying through a Centre for Doctoral Training (CDT) is valuable, Ashar explained: “The key element that attracted me to the CDT was the training that is offered.” Leeds Doctoral College shapes the postgraduate research experience, bringing researchers together through a supportive community.

Ashar continued: “Given that CDT training allows you to cover a wide range of topics, it enables me to hold onto an interest in some of the subjects I covered in the past. For example, I really enjoyed studying biogeochemical oceanography and volcanic hazards, but knew this wouldn’t be in the remit of the PhD I was applying for.

“Also, being able to be in touch with key academics in the Earth observation research sector across a multitude of disciplines only further cemented my desire to study a CDT programme. Though I’m yet to start the formal training, I’m very much looking forward to it.”

Ashar added: “Another feature is the strong tie to industry, and the ability to hold a CASE partnership with a key industrial partner or business working with Earth observation data and tools.

“I’ll (hopefully) be completing mine with the Met Office later on in my PhD which will give me experience with other projects, more applicable, potentially, to industry, but we shall see what comes of it! I’m sure it’ll be an interesting step away from the research I’ll be conducting as a postgraduate.”

...being able to be in touch with key academics in the Earth observation research sector across a multitude of disciplines only further cemented my desire to study a CDT programme.

Deciding to do a PhD

“My PhD is somewhat linked to previous work I conducted as part of my Master’s project,” said Ashar. “During my degree, I did the tiniest amount of atmospheric science and meteorology, specialising in modules such as oceanography, mantle dynamics and volcanology, as well as undertaking geological field trips around the UK and an independent mapping project in Sardinia.

“Sure, the modules I chose did have some ties to meteorology but I didn’t think it was enough given my core academic interest.”

He continued: “After my third year, I undertook a Met Office Academic Partnership (MOAP) studentship with Dr Neil Hart from the Oxford School of Geography and the Environment, with support from Dr Lizzie Kendon from the Met Office.

“My project looked at using an energetics framework to provide reasons for biases in deep convection and tropical storm generation over the Mozambique Channel in a high-resolution convective-permitting climate simulation, compared to a lower-resolution convective-parameterised counterpart. Both simulations, produced by the Met Office, had deep convection biases compared to general observations.

“The work conducted allowed me to dip my toes into meteorology as well as understanding how climate models are formulated, and what pitfalls models of different resolution may have. I was only able to finish the initial portion of the project during the internship, so we extended it so that it ended up being my Master’s project, allowing me to spend more time on something I felt more passionate about.” 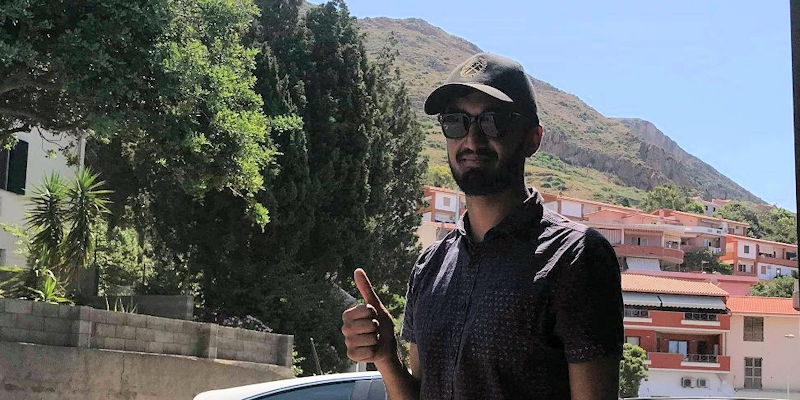 Ashar is at the start of his PhD, so plans for the future are yet to be explored. However, Ashar says he would like to carry on building his computational skillset with continued relation to meteorology and climate. “I would most definitely enjoy finding that bridge between science and society as well,” he said.

Ashar continued: “With meteorology, especially severe weather in areas such as the Maritime Continent around Indonesia and Malaysia, it doesn’t take an expert to note the link to society, given heavy rain equals flooding equals poor sanitation and damage to infrastructure, which can result in displacement and, unfortunately, death.

“Therefore, taking a more climate policy and socioeconomic route in the future could be where I go, though it’ll require me to get more involved in those aspects, in terms of learning, reading and general engagement.

“I would like to shift my focus to more impoverished regions of the world which are the hardest hit by severe weather, including parts of sub-Saharan and Central Africa, Southeast Asia, and the Caribbean. In some of these regions, you may have to couple policy, disaster mitigation and adaptation with other things such as seismic hazard, famine and civil unrest. The cross-disciplinary potential of the work this would involve definitely grabs my interest.”

He added: “I do hope to continue with research, and hope that opportunities in the future can be presented to me – given I’m doing a PhD this seems a pretty typical answer, but knowing how unpredictable the future is, you can’t be so sure.”

The Met Office Academic Partnership (MOAP) at Leeds aims to develop the atmospheric science leaders of the future.