A team of Brazilian and British scientists has uncovered the extent to which trees across the southern edge of the Amazon are infested by woody climbing plants and the impact they have on the forests.

The discovery of new relationships between trees and woody vines (lianas) was published this week in the Journal of Ecology by researchers from the Universidade do Estado de Mato Grosso (UNEMAT) in partnership with the University of Leeds and five other UK Universities.

According to lead author, Dra. Simone Matias Reis from UNEMAT, the University of Leeds and the University of Oxford, more than half of all trees that grow on the southern edge of the Amazon are infested by lianas. As a consequence, the growth of these trees is reduced by an average of one third.

“Lianas have always been a natural feature of the extensive southern edge of the Amazon, but deforestation has broken the remaining forests into small remnants. This fragmentation can generate an increase in lianas, affecting the survival of the remaining trees”, explains Dra. Reis.

Lianas have always been a natural feature of the extensive southern edge of the Amazon, but deforestation has broken the remaining forests into small remnants. 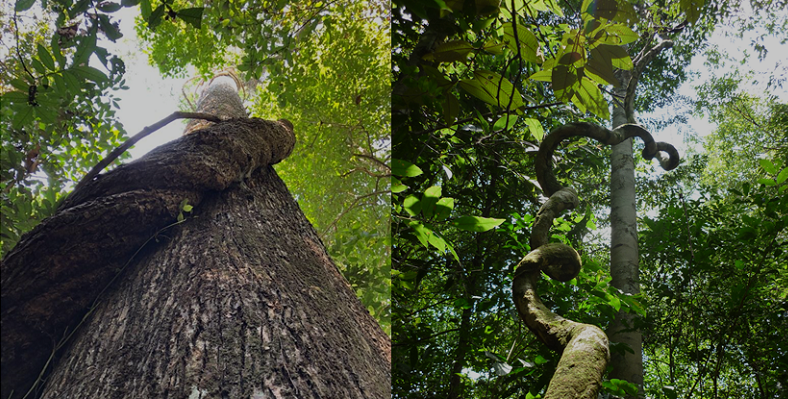 “Lianas make it difficult for trees to absorb carbon. When they reach the canopy, their leaves can cover the trees and starve them of light. This reduces the natural capacity of the forest to remove excess carbon dioxide from the atmosphere”, concludes the researcher.

This study is the first to evaluate large-scale liana infestation across southern Amazonia. The researchers quantified liana infestation in more than 16,000 trees from 27 study plots distributed in remaining forests along the southern edge of the Amazon. As well as deforestation, the region is marked by climate change, having recently experienced several severe droughts and rising temperatures.

Professor Beatriz S. Marimon from UNEMAT has studied these forests for more than 20 years. She supervised this research and points out the risk factors that can lead to trees becoming infested with lianas. “The larger the tree crown, the more likely it is to be infested. But some species are especially susceptible, including those with the hardest wood and the slowest growth”, explained the professor.

According to Professor Oliver Phillips from the School of Geography, co-author of the study and coordinator of the RAINFOR network which monitors Amazon forests, lianas often reduce the advantage of the tallest trees, slowing their growth. “In nature, lianas can help promote a dynamic forest environment and avoid excessive dominance by larger trees”.

“But once the forest becomes highly fragmented, lianas can take over and seriously damage the forest’s ability to store carbon” concludes the scientist.

The paper “Causes and consequences of liana infestation in Southern Amazonia” was published.

Dra. Simone Matias Reis was a PhD student in the School of Geography’s Ecology and Global Change Group and was supervised by Professor Oliver Phillips.