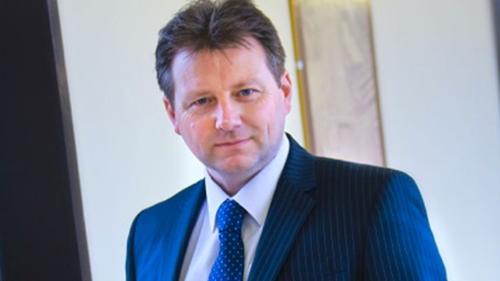 Professor Peter Woodward has been announced as a new Chair in High Speed Rail Engineering at the University of Leeds.

The appointment of Professor Woodward, who is currently an industry-sponsored Professor of High Speed Rail at Heriot-Watt University, comes at an important time in the growth and development of the University and the City.

Leeds City Region has a pivotal role in unlocking the potential of the Northern Powerhouse.

The City is getting HS2 ready, integrating High Speed Rail in its plans for economic growth, as well as the development of the South Bank and the Leeds Station complex, and is drawing on the University's strengths in innovation and enterprise across a number of areas of science, technology and engineering.

Professor Woodward will be responsible for developing a new Institute for High Speed Rail Engineering at the University, using his expertise in geotechnical engineering to create a world leading research and innovation hub with an emphasis on train-track interaction and infrastructure systems.

This will complement other university-based research centres in the UK and respond to industry demand for undergraduate and postgraduate skills in railway engineering and other related areas.

The Institute will also work with a range of international partners including Southwest Jiaotong University in China, where Leeds has opened a new Joint School.

A distinguished researcher, Professor Woodward has played a key role in developing the polymer-based track stabilisation system known as XiTRACK, which has increased track speed and reduced maintenance costs in a number of rail networks.

For example, this technology was used to stabilise the track bed at Clapham Junction, one of the busiest railway junctions in Europe with more than 2,500 trains passing through every day.

Announcing the appointment, Sir Alan Langlands, Vice-Chancellor of the University, said: “We are very pleased to welcome Peter Woodward to the University of Leeds.

“Together with world-leading experts in our Institute for Transport Studies, whose strengths include railway economics, policy and planning, and in Civil, Mechanical and Electronic and Electrical Engineering, he will work with industry partners and colleagues in other universities to provide unrivalled support for a modern rail network in the UK."

Professor Woodward said: “I'm absolutely delighted to be appointed to the position of Professor of High Speed Rail Engineering at the University of Leeds.

“The University is one of the world’s top research-led universities and will play a major role in the development of the Northern Powerhouse.

“High Speed 2 will be of major economic benefit to the City of Leeds and the formation of this new Institute will enable new national and international collaborations, placing Leeds as a global go-to place for high speed rail research in a market that is expanding rapidly across the world.”

Professor Woodward will take up the post in the Faculty of Engineering at Leeds in June 2017.

Contact the University of Leeds press office on 0113 343 4031 or email pressoffice(at)leeds.ac.uk

Peter Woodward is the Atkins Professor of High Speed Railways (first ever UK sponsored chair in high-speed rail) and a former Director of the Institute for Infrastructure & Environment at Heriot-Watt University.

He has a First Class Honours Degree in Civil Engineering and a PhD in Geo-dynamics both from the University of Manchester. He is a Fellow of both the Institution of Civil Engineers and the Permanent Way Institution and a Chartered Engineer.

He was seconded part-time to the railway industry between 2001 and 2010 as the Technical Director of his own spin-out company and in 2016 was appointed as an Honorary Professor at Central South University, China. He has been the Principal Investigator on many research grants, including funding from the EPSRC, EU, TSB and industry.

He invented a unique patented railway track reinforcement system (XiTRACK) that has been used across the UK and overseas (including for the London 2012 Olympics).

This technique received the Highly Commended Award in the Innovation of the Year category at the National Rail Awards 2005, the Institution of Civil Engineers Webb Prize, 2008, the Network Rail Partnering Award 2014 and the Railway Industry Association Product Innovation of the Year 2015. It was also cited by the EPSRC as representing one of the impact case study highlights of the entire REF2014 exercise.

He has given invited Workshops and Keynote addresses at major international conferences across the world on railway track geo-dynamics at high-speed, transitions and track reinforcement.

He is a consultant to the railway industry, particularly on high speed ground dynamics and track reinforcement. He advises High Speed 2 on track geo-dynamics and his work is cited in HS2‘s Earthworks Specification Design Document. He also serves on the Network Rail Track Stiffness Working Group and the High Speed Rail Industry Leaders Group.