University of the Year 2017 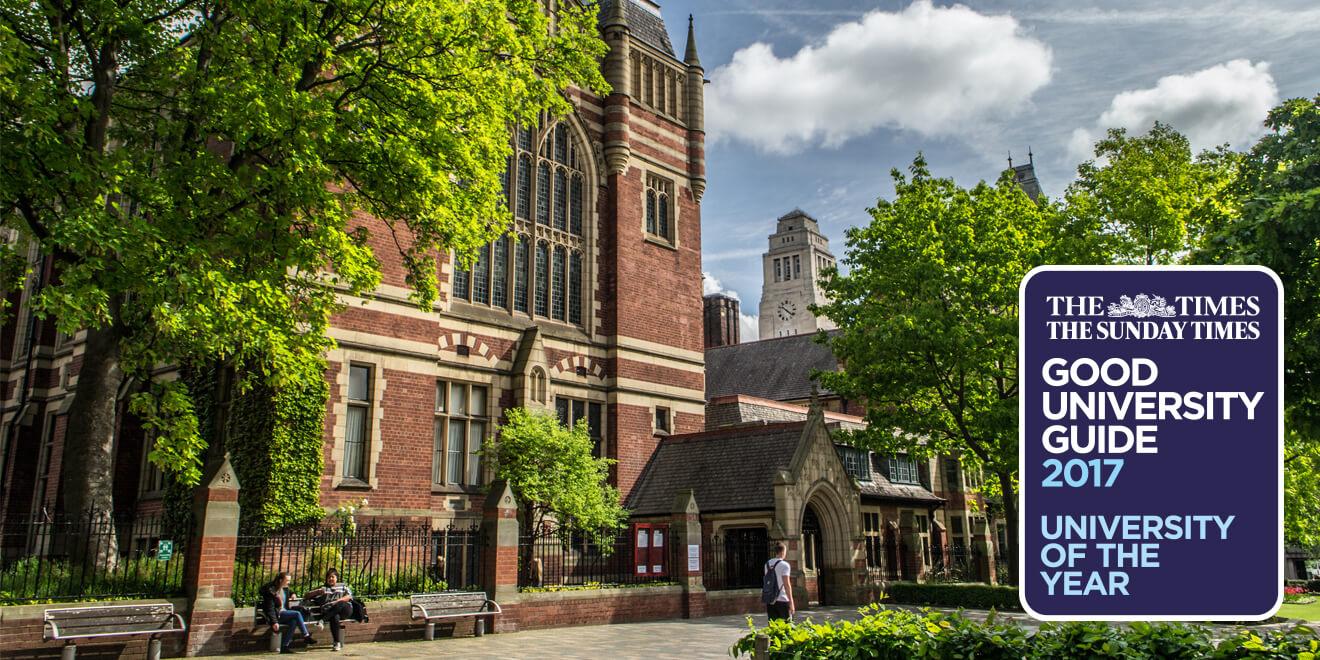 “The University of Leeds thoroughly deserves our University of the Year for prioritising students' needs first to last. Outstanding student satisfaction levels do not happen by accident and reflect the emphasis placed here on getting the student learning experience spot on."

He continued: "Heavy investment in campus facilities has gone hand in hand with a strong pastoral system of student support, the introduction of a final year research-based project as the centrepiece of students' academic activities, and the Leeds for Life scheme that helps prepare students for life after university. It is no wonder that Leeds' graduates are so sought after by employers."

The award follows another year of exceptional student satisfaction levels, where Leeds secured 90% satisfaction in the recent 2016 National Student Survey (NSS). The University also reaches an all-time high in the overall Sunday Times statistical rankings, which creates a league table of universities across the UK based on a broad range of measures. Underpinning the University’s outstanding performance – which sees it rising to 13th place overall - are strong results in student experience, high entry standards, services and facilities, and graduate prospects.

Sir Alan Langlands, Vice-Chancellor of the University of Leeds, said: “The announcement comes at a significant point in the calendar, as we welcome 11,000 new colleagues and students to campus for the start of the academic year. I know that their energy, commitment and inspiration will be essential as they work with the existing University community to build on these strengths. We have been supported by unparalleled investments in our staff, research capability and campus, which makes Leeds a truly remarkable place when it comes to inspiring knowledge and creating opportunity.

We are investing in future generations of independent, critical thinkers and cutting edge research of real impact and significance."

Investing in knowledge and creating opportunity

Examples of recent investments include a multi-million pound project for the Student Union building, to help Leeds University Union remain one of the UK’s biggest and best unions.  The work includes transforming retail spaces, bars and café areas, as well as creating improved performance venues and facilities for societies. The Edward Boyle Library is also being refurbished to create an IT-rich library, home to over 2,000 group and silent student spaces, teaching spaces and a new postgraduate study zone. This complements the new state-of-the art undergraduate provision in the £26m Laidlaw Library, which officially opened in July 2015. The investments form part of the University’s £520m campus development programme, supporting Leeds’ position as one of the UK’s top higher education institutions.

This new title follows an impressive year of accolades, with the University winning The Duke of York Award for University Entrepreneurship at the National Business Awards, being named Entrepreneurial University of the Year in the Times Higher Education Awards, and receiving the Guardian University Award 2016 for its support of enterprising students. The University was also ranked in the top 20 UK universities in the Guardian University Guide 2017 league table. Most recently, Leeds secured a leading position in the QS World University Rankings 2016/17, once again being positioned in the top 100 best universities in the world.