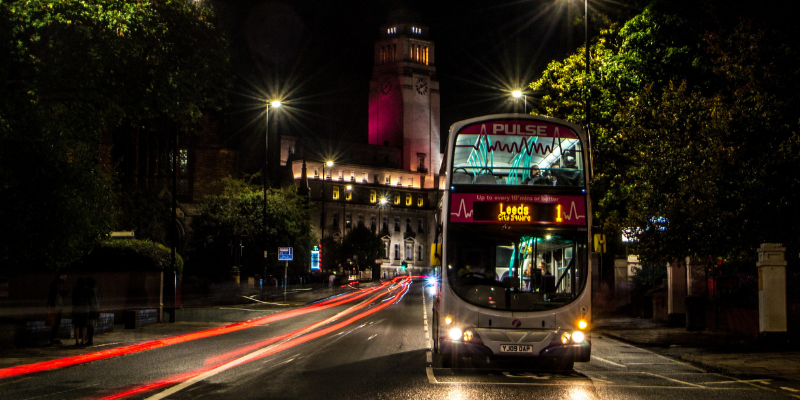 A new study from Professor Simon Shepherd and Professor Anthony May has predicted the effects driverless cars could have on urban transport systems and public behaviour in the City of Leeds.

Using Leeds as a case study, the ITS researchers, along with colleagues from TU Wien in Vienna and BOKU Vienna, have used mathematical models to estimate the most likely and significant outcomes of having widely available autonomous vehicles.

With the currently available data, the models also predicted a possible significant drop in public transportation use, potentially as much as 18 per cent, with walking and cycling is estimated to fall by 13 per cent.

This increase in driving distance could potentially lead to a rise in urban sprawl if residents are more willing to commute further into city centres. This in turn could have additional negative impacts on the environment with the loss of green space and possible increase in vehicle emissions.

Study co-author Professor Simon Shepherd said: “The trends we’ve uncovered raise concerns about whether the predicted surge in self-driving cars will align with hopes that future transport will be more sustainable. There are many issues that still need to be considered and scenario planning can help pinpoint the important questions.

“For example if public transport is used less frequently could that lead to reductions or cancelation of services that many people depend on? Autonomous vehicles can search independently for a parking space, do cities need to rethink the current approach to parking management and layout? Are planned emission policies robust enough to protect the environment from such a large increase in overall car travel?”

“Autonomous vehicles may one day outnumber cars driven by humans. Self-driving cars will completely change how people move around their communities and cities. Predictive assessments like this are essential in order to prepare policy makers and city planners for what a driverless future might look like.”

Study co-author Anthony May, Emeritus Professor of Transport Engineering, said: “Leeds was used as a case study but our scenarios could easily be applied to other cities to estimate the scale of change and adaptation needed for city communities.

“There certainly are potential benefits to a “driverless revolution” – fewer accidents, making private travel more widely available – but we cannot overlook the looming consequences. More research needs to be done to better understand the full impact self-driving cars could have on our urban environment. Other factors such as an increase in car sharing or automating public transport could also have significant effect on how driverless cars shape the transport future.

We have a limited time in which to respond to these new technologies, and governments need to be thinking now about the regulatory framework as well as promoting the technology. ”

Cllr Kim Groves Chair of the West Yorkshire Combined Authority Transport Committee, who was not involved in the research, said: “We are looking closely at emerging technologies as we consider meeting future transport needs and understanding the opportunities they present in meeting our aims of reducing congestion and the pollution that goes with it, as well as potential negative impacts.”

The research team is currently working to assess additional factors that could impact how driverless cars could affect cities, such as opportunities for automating public transport, to continue to build a picture of a driverless future.

The study authors have prepared a conference paper which includes their findings titled: The potential impacts of automated cars on urban transport: an exploratory analysis.

The findings were presented at the World Conference on Transport Research Society (WCTRS) in Beijing October 2018.

The final paper is currently under review for the 2019 World Conference on Transport Research (WCTR 15) in Mumbai.

The extended abstract and conclusion is currently available on Research Gate.