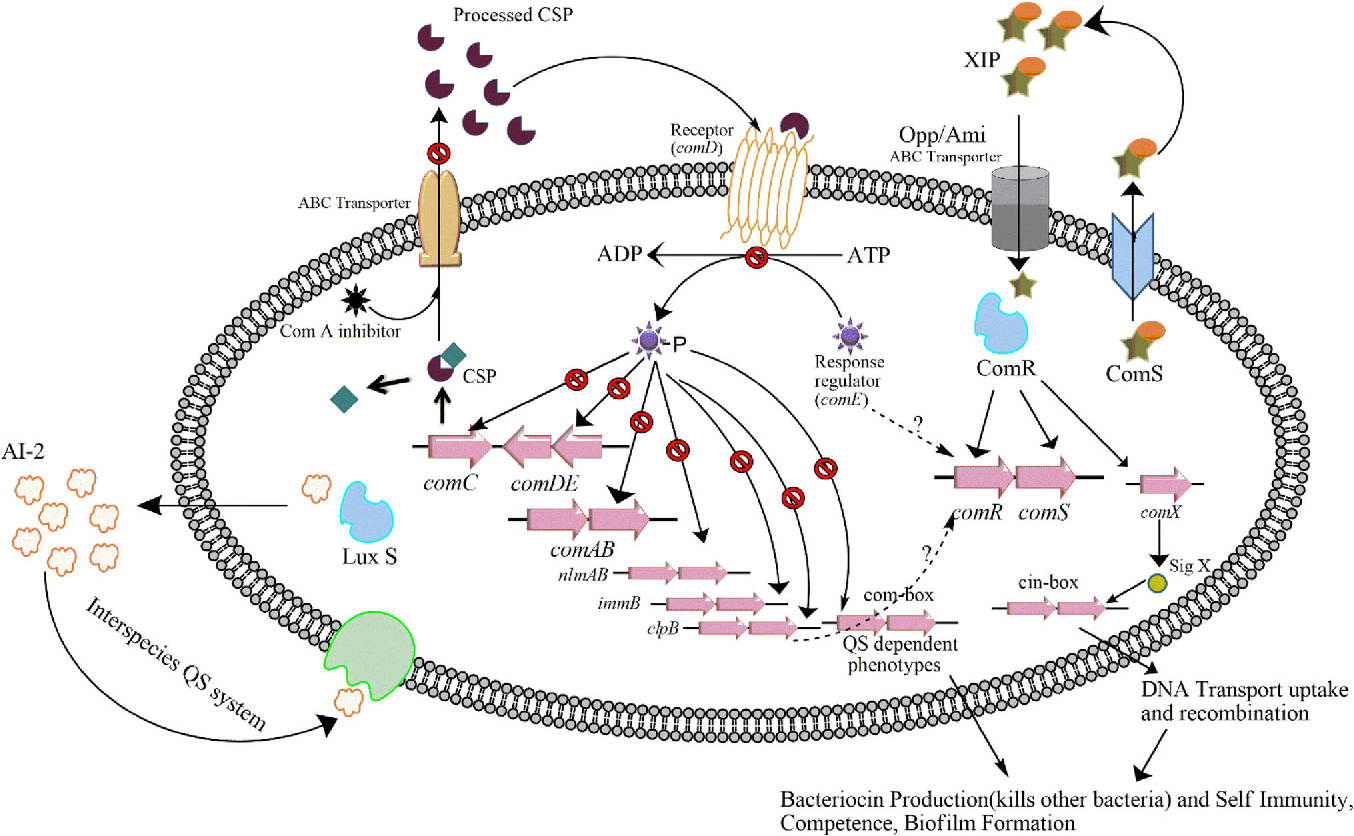 Streptococcus mutans, is one of the early colonizer among the ~700 bacterial species, to exist in the human oral cavity and cause dental caries. Quorum Sensing (QS), a cell-density dependent communication process in which bacteria respond to the inter/intra-species signals and as a result express various virulence genes in synchrony. In accordance to this phenomenon, S. mutans possess Competence stimulating peptide (CSP)-mediated QS, ComCDE(two-component regulatory system) known to upregulate several virulence-associated traits that includes biofilm formation (dental plaque), genetic competence and acidogenicity.

CSP is known to be processed and matured by ComA (ABC transporter) eliciting QS response. The key involvement of ComA in maturation and secretion of CSP made it as a favourable target for QS inhibition of S. mutans. In a previous study carried out by the fellowship candidate, 1,3-di-m-tolylurea (DMTU) is shown to downregulate the expression of ComA and thus resulting in anti caries effect by inhibiting biofilm formation as well as other virulence factors at a very low concentration of 3.75 μM.

Previous results also indicate the synergistic effect of DMTU (3.75 μM) along with fluoride at a lower concentration of 31.25 ppm, which is far less than the concentration of fluoride used in present oral health formulations. Despite the success of previous studies at a pre-clinical stage (in Wistar rat model), minimal information is available about delivering this anti-QS agent in the form of a formulation optimized for the oral cavity. In this regard, biologically derived nano-carrier formulations have been used extensively for drug delivery systems. It is also a known fact that the pharmaceutical activity of anti-virulent agents might improve upon encapsulating them with biopolymers in the form of nanocapsules.

So, in the present study, we plan to encapsulate DMTU in chitosan-based nanocapsules to enhance its activity and design a successful delivery system for clinical use. It is expected that the anti-QS activity of DMTU will be enhanced, as we have recently confirmed it for flavonoid compounds in an AHL-bioreporter E. coli strain.

Furthermore, we also plan to analyse the effect of inhibition of S.mutans on the growth of late colonizer P.gingivalis in co-culture studies. The proposed studies in S. mutans will be unprecedented and will widen our current understanding and strategies to tackle problematic dental pathogens. Blocking of bacterial QS is considered a promising strategy to mitigate the virulence of bacterial pathogens, without exerting as much selective pressure as with antibiotics.

The supervisor for this project is Professor Francisco M. Goycoolea.

This project is at the forefront of worldwide research developing innovative antibiofilm/antiplaque strategies against dental caries. Dental caries has been recognized as one of the most commonly ignored infections worldwide, leading to inflammatory systemic infections such as Rheumatoid Arthritis, Cardiovascular diseases due to atheromatous plaque.

The host university has one of the largest groups of microbiologists in the UK working on antimicrobial resistance which brings together researchers across the campus and clinicians working on host-pathogen interactions. Being part of this environment will, therefore, sustain the international recognition of the UK higher education system, focusing on the study of alternative strategies to tackle antimicrobial resistance such as exploiting quorum sensing of pathogenic microbes.

In the long term, the anti-quorum derivatives generated during the project will benefit the wider society, including the health care public sector and patients from the UK and worldwide who will benefit from novel anti-biofilm treatments. The biotech and pharmaceutical companies will potentially be able to exploit this research.

Work is still in progress for this project and research paper will be published by this year end.