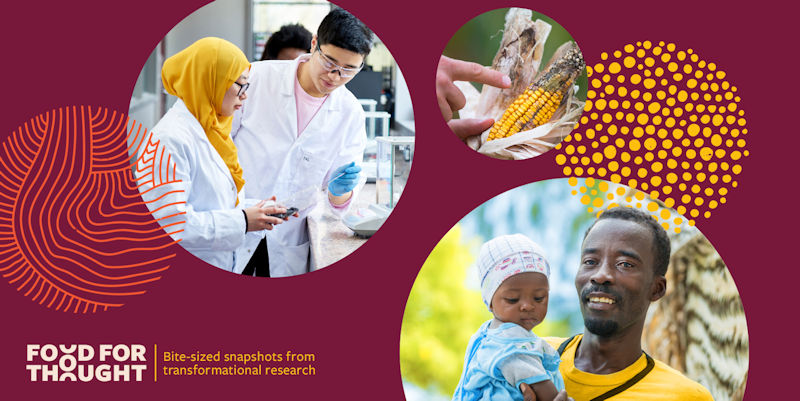 Research conducted by Professor Yun Yun Gong and her team at the School of Food Science and Nutrition has been instrumental in showing that exposure to aflatoxins could be a cause of stunted growth in children in Africa. Now she is uncovering the different factors at play in the mechanism of aflatoxin contamination and its health risks.

Aflatoxins are highly toxic compounds produced by certain fungal moulds which grow on cereals, nuts and oilseeds. Large parts of sub-Saharan Africa are affected by aflatoxin contamination, notably in maize, a staple of the African diet that is particularly susceptible to the fungus.

High levels in the blood

Almost all children in Africa are exposed to aflatoxins within their first two years through their weaning food and family food. The levels of exposure can vary from year to year, measured by the biomarker of the toxin in the blood. While children in the UK have zero exposure to aflatoxins, in Africa the levels in children’s blood are very high, at around 80%-90%.

Aflatoxins don’t only cause stunting, but can affect the immune function in both adults and children, and can cause liver cancer. If a lot of contaminated food is eaten in a short time it can have fatal consequences.

Professor Gong, a Professor in Food Safety and Global Health, is working with agricultural and ecological experts to identify the key factors that cause aflatoxins to be so prevalent in African countries, as well as on the mechanisms of growth stunting and ways to reduce community exposure.

While it’s now clear aflatoxins are a risk agent, little is known about precisely how they affect child health. Through different large cohort studies in African populations, Professor Gong and her team want to understand more about early exposure. The toxin is known to cross the placenta, and can be ingested both through breast milk and from foods when weaning begins, permanently affecting infant growth.

Professor Gong says: “Do aflatoxins inhibit protein synthesis in the infant’s body, or do they cause immune suppression, leading to more infectious diseases like diarrhoea and malaria? Or it may be that they prevent nutrient absorption and that is what is causing the malnutrition. Many factors could be involved.”

Professor Gong has been focusing on Africa for twenty years, with a series of studies on aflatoxins in Benin, Tongo, Guinea, the Gambia and Tanzania, that explored foetal exposure, weaning practices, growth patterns and low-cost intervention strategies for subsistence farmers.

During this time, Leeds researchers pioneered the testing methods for human exposure involving blood biomarkers, which has been essential in their research of into the exposure and health risks of aflatoxins.

Professor Gong’s work is currently being funded by GCRF-AFRICAP, Leeds University’s programme to make agriculture and food production in Africa more productive, sustainable and resilient to climate change.  Researchers know that as the climate gets warmer, this type of toxin will thrive.

Convincing evidence from these earlier studies resulted in policy action by local governments, starting in 2013 when Professor Gong’s work was used as a basis to formulate the Partnership for Aflatoxin Control in Africa strategy. 54 African countries participate in this partnership, which is funded by the Bill and Melinda Gates Foundation

Professor Gong has worked extensively with the East African Communities, advising on policy changes. Her work in Tanzania has influenced policies of the Tanzania Food and Drug Authority and her research was used as evidence for action to set up the Tanzania Initiative for Preventing Aflatoxin Contamination (TANIPAC), a five year project funded by the World Bank that aims to improve harvest practices, raise public awareness and strengthen institutional capacity.

Several strategies are being tested, such as using special storage sacks for harvested maize that ventilate the crop better, reducing moisture and so fungus levels. And a new type of fungus from the same family, which does not produce toxins, is released into crop fields to compete with and reduce the toxic type.

Shifting to a more diverse diet

Professor Gong would like countries to adopt more diverse diets, such as increasing production and consumption of soybeans, or wheat and rice. In Gambia, where the aflatoxin exposure was found to result mostly from peanut consumption, the government took timely action to promote alternative crop production. In Zambia the government is shifting to more soybean production, which will provide a good protein source for nutrition replacing of groundnuts, if farmers can adapt to the necessary changes.

We know that the most effective way is to work with the government and the public on agricultural, food safety and public health policies and protect the vulnerable populations especially the future generation.

Professor Gong says: “Aflatoxin is a naturally occurring fungus, and we can’t eliminate it; we can only minimise it. We know that the most effective way is to work with the government and the public on agricultural, food safety and public health policies and protect the vulnerable populations especially the future generation.”

If you would like to discuss this area of research in more detail, please contact Professor Yun Yun Gong.