Examples of impact from a small selection of our Met Office CASE PhDs are outlined briefly here. Many of our PhD students go on to research careers in academia, the Met Office or elsewhere.

Leighton Regayre’s CASE PhD with the Met Office improved our understanding of the extent to which atmospheric aerosol particles historically affected our climate through their interactions with clouds and radiation.

Aerosol properties, such as their number, size and composition all need to be simulated accurately in climate models, so that we can robustly calculate their interactions with the wider Earth system.

Leighton created and evaluated several perturbed parameter ensembles of the Global Model of Aerosol Processes (GLOMAP) and quantified how much climate uncertainty each of more than 30 model processes caused. His research informed model adjustments (implemented by the Met Office) that improved the accuracy of historical climate simulations and contributed to GLOMAP being included in the UK Met Office climate model (GC3.1) and adopted as a core component of the UK Earth System Model (UKESM1).

To support the implementation of GLOMAP the Met Office undertook organisation restructuring to create an ‘aerosol and cloud microphysics team’. GLOMAP was used in the Met Office Unified Model contribution to phase 6 of the Coupled Model Intercomparison Project (CMIP6) and has been internationally adopted through the Unified Model Partnership. Thus, research from Leighton’s PhD contributed to Unified Model partners (from New Zealand to Korea) being able to create higher fidelity climate, weather and air-quality simulations.

His research also provided unique insights that directly influenced the set of probabilistic projections the Met Office created for the Department for the Environment and Rural Affairs (DEFRA) UK Climate Projections 2018 (UKCP18). These are freely available online for user groups to download and use, to help the UK make policy decisions about climate adaptation strategies that provide resilience to the effects of climate change. 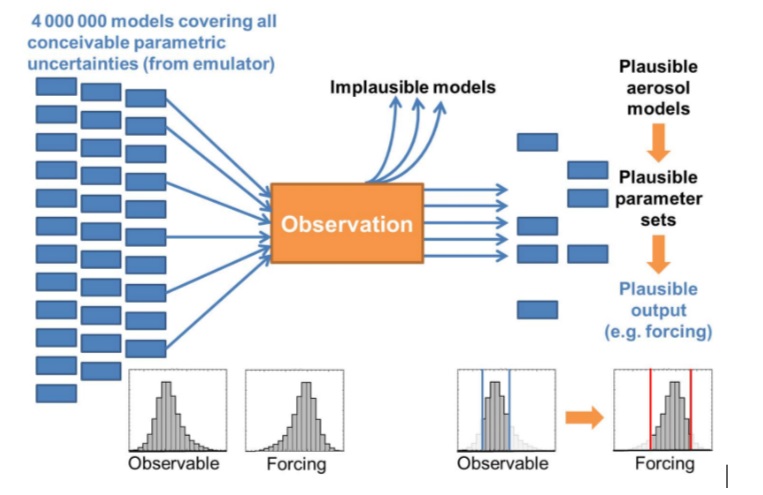 Figure 1 from Johnson et al., 2020 – a schematic of the methodology for densely sampling model parametric uncertainty and observationally constraining the associated uncertainty in aerosol radiative forcing. 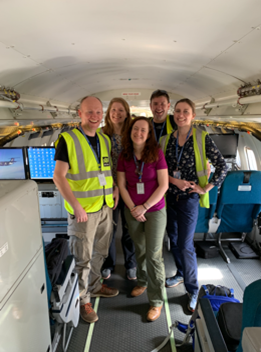 Leeds, Met Office and FCDO staff onboard the FAAM research aircraft for a HyVic pilot flight.

Beth Woodhams CASE PhD with the Met Office provided new understanding of severe storms over East Africa, and how new models improve forecasts for such events.

Beth was awarded the L F Richardson prize from the Royal Meteorological Society for her research, as well as a water@leeds Water Woman award.

Her research showed how new “convection-permitting” weather models from the Met Office improved forecast skill for rainfall, and delivered new understanding of the storms that form over Lake Victoria, where 1000s of fishermen are believed to lose their lives  due to storms every year. Her research motivated and supported the first ever research flights over Lake Victoria, which allowed unique observational evaluation of forecast models. 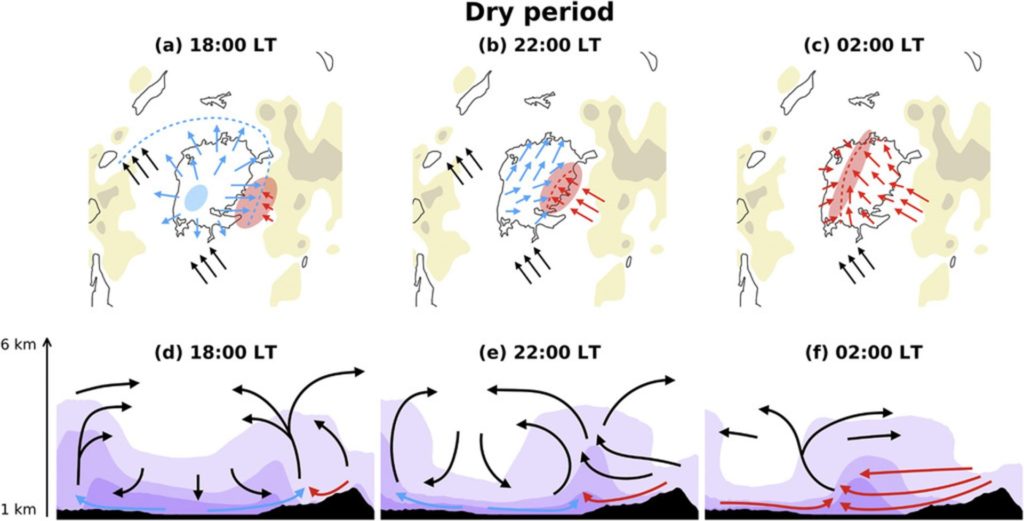 Schematic of the formation of the moisture bulge over Lake Victoria, taken from Woodhams et al. (2019).

His research directly informed the CIAT bean breeding program by identifying enhanced leaf cooling as a source of heat tolerance in common bean, and revealing the mechanisms through which this was achieved. These results led to follow up experiments at CIAT and across partnering organisations. Chetan led the first MultispeQ paper from CIAT’s bean breeding program, which was an important first step in integrating high-throughput MultispeQ measurements in their screening processes. These are now widespread.

Onset of the West African monsoon

Agriculture in West Africa, as well as many other industries, is reliant on monsoon rainfall, and skilful seasonal forecasts of rainfall onset and rainfall totals benefit decision making.

Rory Fitzpatrick’s CASE PhD focussed on better quantifying onset of the West African Monsoon, and exploring the difference between localised and regional-scale triggers for the start of persistent monsoon rainfall.

Through an extensive literature review, Rory identified 23 unique definitions of the West African Monsoon Onset, and published one of the first comparisons of the onset date as derived from different definitions and datasets. This now well-cited work highlighted the challenge in communicating relevant onset information to decision makers in the region, and the potential lack of practical value in the information provided from many scientific studies.

In particular, Rory’s research highlighted that regional onset dates, the most commonly assessed and studied metric over West Africa, have almost no correlation with local onsets of agriculturally useful rainfall.

Rory committed the rest of his PhD to understanding the spatial limits of homogenous timings for local onsets of persistent rains over West Africa and other monsoon regions, and to identifying potential drivers of this variability.

Throughout his PhD, Rory focussed on understanding the value of weather data provided to stakeholders with an interest in communicating not only the quality of information, but how relevant and timely it was for decision makers. This work extended into his postdoctoral work with AMMA-2050, where he worked closely with knowledge exchange partners and agricultural scientists to deliver research to support climate change adaptation in West Africa. 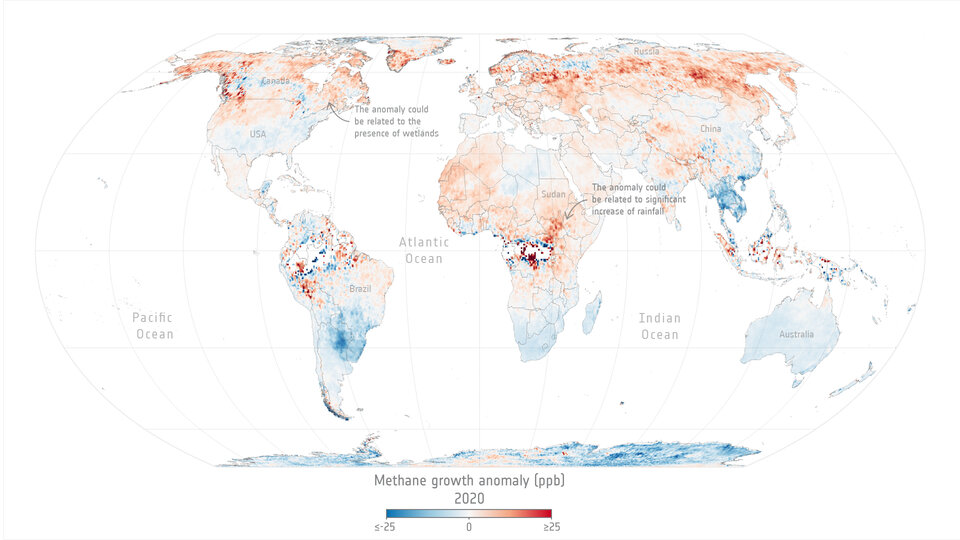 Emily Dowd is a CASE PhD student with the Met Office.

She has found that satellite measurements show the same increase of methane as demonstrated in surface measurements, and by using the global coverage capability of Sentinel-5P identified regions which showed large increases throughout 2020. These include South Sudan and Uganda in Central Africa, along with high-latitude northern regions including Canada and Russia, with wetlands very likely contributing to these (research presented at the ESA Living Planet Symposium, May 2022, featured as an ESA webportal story).

Emily’s 3-month placement at the Met Office will enable her use of the Met Office’s Numerical Atmospheric-dispersion Modelling Environment (NAME) to investigate large point sources of methane in the UK. This research to identify and understand methane sources supports efforts to reduce global warming by reducing emissions.

Alongside her research Emily has co-written a successful proposal for the NERC Engaging the Public with Environmental Science call, which secured funding for the SatSchool outreach project which launched in April 2022. SatSchool is an Earth Observation (EO) outreach package with ready to use resources aimed at 11-15 year olds.