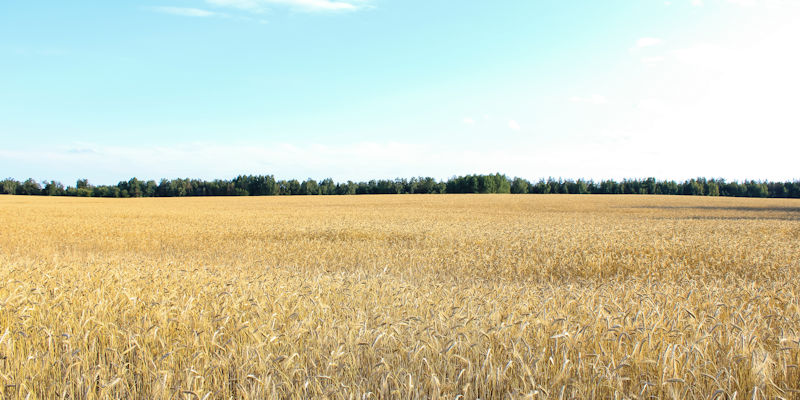 Past farming practices, including growing clover and grass with arable crops and laying hedges, could be key elements of future farming methods aimed at protecting soils. Research by Professor Joseph Holden and colleagues at the University of Leeds farm is showing how soils can be improved and maintained sustainably through incorporating some traditional farming practices.

Professor Holden’s expertise is in soil hydrology and his work in this area is focused on understanding how management practices affect the hydrological function of the soil and downstream effects like flooding. Traditional farming used the practice of rotating arable crops with one or more years of the field left fallow under a grass/clover ley. Fields in the past were also more likely to be surrounded by hedges. The SoilBioHedge project, based at the University farm, is investigating whether this practice could have a role in modern farming to improve soil management.

We have found that leys can restore soil structure and earthworm populations... soils under hedgerows and field margins also... store more water and carbon.

“By incorporating grassland strips (leys) in arable trials fields, we have found that leys can restore soil structure and earthworm populations after a couple of years,” said Professor Holden. “Soils under hedgerows and field margins also support earthworms and store more water and carbon. Hedges, in particular, can act as a buffer after rainfall events.” Future farming practices that disturb the soil less, such as direct drill sowing and minimum cultivation methods may help sustain better soil function than today’s intensive methods.

Additional research is investigating if planting more trees on farms may also have a role to play in the future of sustainable farming. Professor Holden and colleagues Professor Pippa Chapman and Dr Marcelo Valadares Galdos are using the established agroforestry plots at the university farm and forging links with local farmers to explore how trees might help to support a sustainable local economy and enhance soil functioning and water storage on farmland.

Lowland peatlands are some of the UK’s highest value and most intensively farmed agricultural soils. They are also the country’s largest land-based source of carbon dioxide and are degrading rapidly due to traditional farming methods. Professors Joseph Holden, Andy Baird and Pippa Chapman and colleagues at partner universities, are investigating land management strategies that ensure a sustainable future for these valuable agricultural soils.

Lowland peatlands are typical of the landscape in the East Anglian Fens and Somerset Levels. The Fens cover 4% of the UK’s agricultural soil yet produce 7% of the total agricultural produce, worth over £3 billion to the economy.

When [peat soils are] drained, they degrade and become greenhouse gas hotspots. This is a big challenge for creating a sustainable food supply and net zero targets.

Widespread drainage of the naturally waterlogged soils for agricultural use leads to degradation and compaction as the water table is lowered. Exposure to the air causes oxidation of the carbon rich soil, with the carbon lost to the atmosphere as carbon dioxide. The result is loss of the valuable soil as well as emissions.  “Peat soils need to remain waterlogged to retain function as a carbon store,” says Professor Holden. “When drained, they degrade and become greenhouse gas hotspots. This is a big challenge for creating a sustainable food supply and net zero targets.”

Professor Pippa Chapman sits on the Department for Environment, Food and Rural Affairs’ (DEFRA) Yorkshire and North East lowland peat taskforce to support work on driving restoration and the economic viability of crops with shallower water tables. This could lead to new farming practices which are more sustainable. Professor Joseph Holden is also providing direct advice to DEFRA on several peatland advisory groups, including the England Peat Strategy implementation board.

If you would like to discuss this area of research in more detail, please contact Professor Joseph Holden.