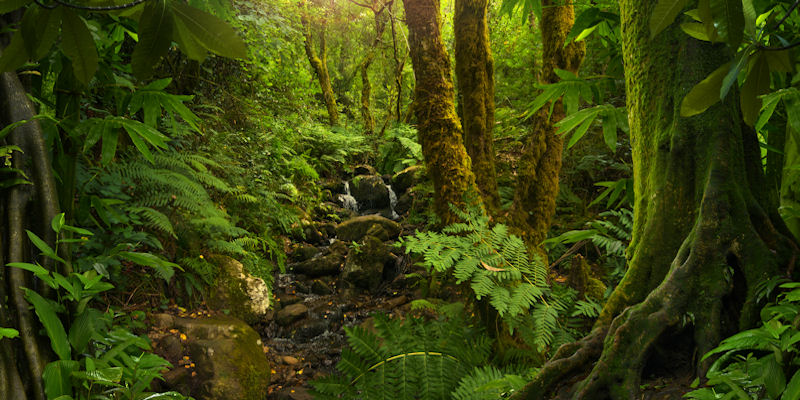 International research, led by scientists from the School of Geography, showed for the first time that undisturbed rainforests actively store carbon.

Building on this, Professor Oliver Phillips, Professor Simon Lewis and colleagues have established and led a global forest observatory to assess rainforest carbon stores. It now covers more than 30 countries with over 250 scientists and 50+ participating institutions.

This important research has influenced international climate change policy and efforts in countries across the tropics to manage forests and reduce carbon emissions from deforestation.

Before 1998 it was thought that undisturbed forests were static carbon stores with rates loss through decay equal to storage through new growth. Since then, field research led by Professor Oliver Phillips, has shown that undisturbed forests in Amazonia were continuing to take in and store carbon from the atmosphere, making them an important dynamic in the global carbon cycle. Tropical forests occupy a global area of more than 10 million km2, store 300 billion tonnes of carbon and cycle 30 billion tonnes each year. This means small changes in the carbon balance of the forests can have big impacts on the global carbon cycle and climate.

A key part of the Leeds researchers work has been to develop a standardised package of techniques for assessing carbon storage in tropical forests, which is used to train an extensive international network of scientists. Together with the international database, www.forestplots.net, this network has established a robust and scientifically credible global observatory of permanent study plots in intact tropical forests.

Through the Amazon Forest Inventory Network (RAINFOR) Professor Oliver Phillips, and colleagues, have shown that increasing growth in tropical forests is likely to be caused by an increase in atmospheric CO2. The work has also demonstrated how sensitive forests are to drought and that during the 2005 Amazonian drought this led to an extra 5 billion tonnes of carbon emissions through tree mortality.  A second network, AMAZONICA, led by colleague Professor Emanuel Gloor and focused on the Brazilian Amazon, has extended the assessment of carbon stores and climate change dynamics.

The global network increased its reach into tropical forests in Africa through the AfriTRON research network, which brings together African and European scientists led by Professor Simon Lewis, also from Leeds. Together these multi-continental field research networks cover more than 30 countries and bring together over 300 people in 50 or more institutions. They have demonstrated that tropical forests remove 4.8 billion tonnes of CO2 emissions from the atmosphere every year

The research has had far-reaching impacts across the tropics. It played a significant role in shaping the science that informs the 2009 United Nations Framework Convention on Climate Change. Also NASA used the carbon-store data to produce the first baseline carbon map of the world’s tropical forests.

In Africa, the research led by Professor Lewis has had a direct input into the National Climate plans of Gabon. The Leeds carbon assessment approach was used to train Gabon’s national carbon inventory teams.

Training local forest monitoring teams across Amazonia and Africa has enabled in-country organisations to participate in mapping carbon stocks. The Leeds team has played a fundamental role in developing a diploma programme for forest managers for NGOs such as WWF-Peru. The data within RAINFOR allows sophisticated analysis of rainforest dynamics world wide and is the tool chosen by over 400 NGOs and forest managers.

The UN REDD + programme aims to reduce emissions from deforestation and forest degradation and enhance forest carbon stocks in developing countries, through giving financial help to countries to preserve their tropical forests intact. The training and monitoring strategies developed by Leeds continue to play a crucial part of REDD+ projects in Gabon, Brazil, Peru and Columbia as they work to protect their tropical forests and the huge natural carbon storage systems they provide.