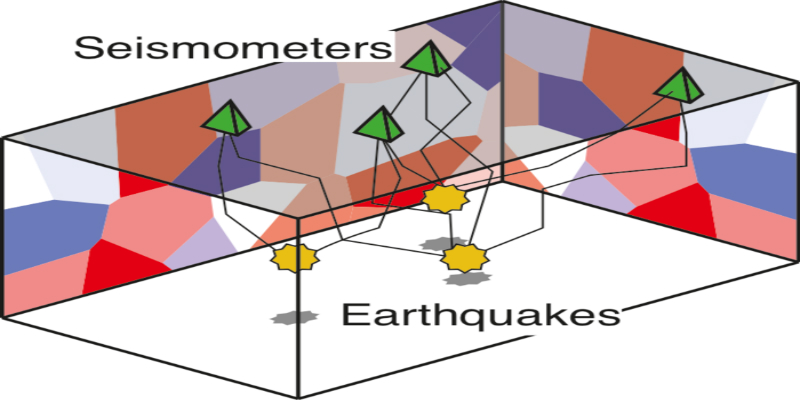 The Bowland Shale, England, contains ~1,300 trillion cubic feet of shale gas, a recoverable resource worth hundreds of billions of pounds over coming decades. If this resource is exploited, it must be done so using hydraulic fracturing ('hydrofracturing'), where fluids are injected at high pressure into the rocks to create fractures through which the gas can move.

This process has transformed the USA into a gas exporter and dramatically reduced prices worldwide. Nevertheless, hazards arise from this process: hydrofracturing, alongside mining and carbon capture and storage, may induce earthquakes, which if large enough, can cause shaking at the Earth's surface that leads to damage. To mitigate the risk of such earthquakes to people and infrastructure, regulators demand that operations halt if earthquakes above a certain magnitude occur in a 'traffic light' system.  However, existing methods used to characterise earthquakes do not account for the possible range of magnitudes, meaning that there will be cases where operations are incorrectly permitted to continue (or are halted) based on random variation or bias in the earthquake parameter estimates. 'False alarms' would lead to millions of pounds of lost income whilst damage from unexpected seismic events would be equally costly—and it is not even known which of these outcomes is rendered more likely by errors in earthquake magnitudes.

In this technology-led proposal, we propose a new method to estimate jointly the seismic velocities of the subsurface and the locations of observed microearthquakes while varying attenuation, by using recordings from an array of seismometers at the surface. Such an arrangement is advantageous for cost and speed purposes, though is limited by uncertainty in the properties of the subsurface between the earthquakes and the stations. This fully non-linearised approach allows for the first time to calculate true tradeoffs between earthquake parameters and subsurface properties, yielding true joint probabilities that an event occurs in a certain location, and above a certain magnitude.

We will apply the method to several existing datasets. One contains the magnitude 2.3 event at Preese Hall, Lancashire, which halted the testing of hydraulic fracturing in May 2011, and so is a direct recording of what might be expected in future. Another is a set of mining-induced events which were recorded at the New Ollerton coal mine in Nottinghamshire, and serves as an excellent analogue for future industrial deployments in the UK.

We will also test our ability to image magma chambers beneath three volcanoes, in Bolivia and Ethiopia, using our method applied to available data.

By comparing our results to those from existing methods, we will show where bias is present in traditional techniques. Our method, having been validated in several ways, will serve as a useful ground truth against which we may compare methods which do not fully account for the linked distribution of subsurface velocities and event magnitude.

The overarching objective of this proposal is to develop a new method to better image the Earth and enable the creating of specific, testable hypotheses of Earth processes and structure.  However, a paired, integral objective is to devise new recommendations to improve monitoring and high-value decision-making for the future of induced seismicity in the UK and worldwide.  We will use the results of the work packages we describe to construct specific, probabilistic thresholds for future 'traffic light' monitoring systems, and benefit regulators, operators and the public.