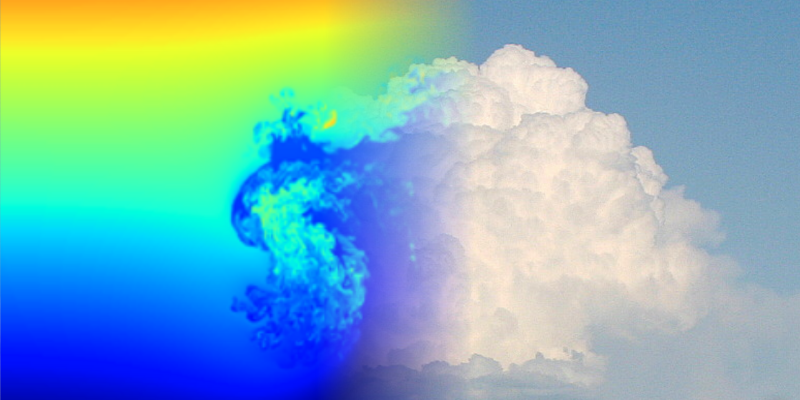 The importance of clouds in weather and climate has long been recognised, yet accurate cloud modelling is immensely difficult due to the wide range of energetic, spatial and temporal scales involved in cloud formation, growth and decay, and the highly nonlinear nature of these turbulent cloud processes. Indeed, the turbulent behaviour of clouds is responsible for many of the uncertainties in atmospheric models, affecting cloud formation and thereby disrupting the global energy balance in climate simulations, as well as the timing and intensity of precipitation in weather forecasts.

Weather and climate models fail to resolve the details of the interactions between clouds and their environment and suffer from a crude representation of important microphysical processes, such as rain and snow formation. These processes can be studied in detail using Large Eddy Simulation (LES), a widely-used computational approach employing a fixed discrete grid - a so called Eulerian approach. Typically, LES uses grid spacings below 100 metres to resolve such cloud-environment interactions. However, LES still suffers from substantial sensitivity to numerical mixing. This is due to the highly nonlinear nature of the dynamics and thermodynamics of clouds.

For the formation of precipitation, regions of high liquid water content are crucial, and numerical mixing can prevent the occurrence of such regions in Eulerian models. We have recently developed a promising new computational model, MPIC (Moist Parcel-In-Cell), which largely overcomes these numerical errors. MPIC deals with the dynamics of clouds in an essentially Lagrangian framework, i.e. by explicitly following parcels of fluid rather than approximating this motion on a fixed grid as in LES.

The MPIC model represents both dynamics and processes explicitly using Lagrangian parcels that carry a volume, circulation and thermodynamic properties (e.g. potential temperature and moisture content). This approach accurately preserves key parcel properties and avoids problems due to numerical mixing at small scales that are inherent to Eulerian models.

Our research aims to adapt the MPIC model for use in realistic atmospheric case studies as well as advance our understanding of the fundamental dynamics of cloud turbulence. In particular, we will investigate how discontinuous diabatic forcing associated with condensation and evaporation modifies turbulence relative to adiabatic conditions.

This research presents a novel opportunity to improve our theoretical understanding of generic features of cloud processes. It is especially timely due to the development of a massively parallel version of MPIC, which can resolve detailed processes far beyond the reach of existing numerical models. The potential impacts of this research are vast. Since entrainment in convective clouds strongly influences heavy rainfall, new discoveries about entrainment should enable improved flood forecasting, potentially saving lives, property and business assets.

Beyond this project, aspects of the MPIC model may be adopted by numerical weather models to improve the representation of cloud processes and rainfall events. The pathway to this is first to engage scientists at the Met Office, who have agreed to be a project partner. Aspects of the MPIC model will need to be integrated into the latest Met Office model, and the proposed research will make significant progress towards this goal.

The proposed research will make substantial advancements in our understanding of fundamental turbulent processes, ultimately leading to improved weather and global climate models. Extensions to the MPIC model will make it well-suited to a range of geophysical applications including cloud simulations and atmospheric chemistry experiments, making it attractive to a wide scientific and industrial audience. Image based on MPIC simulation and photograph by Wing-Chi Poon, CC-BY-SA 2.5