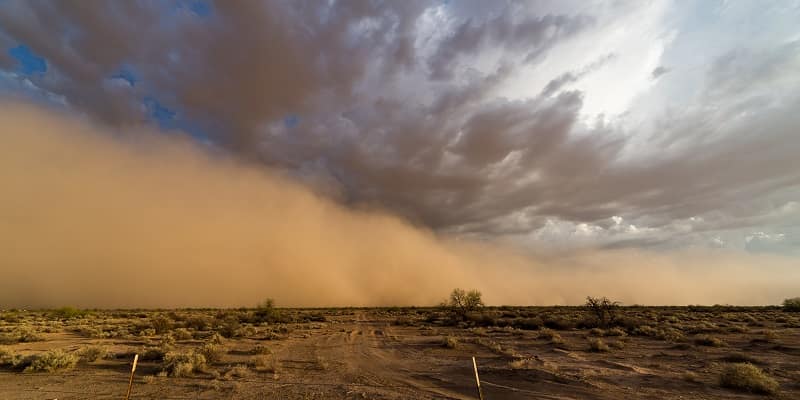 Mineral dust emitted from deserts is one of the most important natural contributors to fine particles in the atmosphere. Dust storms form when sufficiently high winds occur over soils that contain grains small enough to remain in the atmosphere after having been lifted from the surface. These particles are typically only a few micrometers (a thousandth of a mm) in diameter.

Atmospheric dust is currently a very active research topic due to its effects on climate and weather brought about by processes such as the reflection and absorption of sunlight by dust layers, the formation of ice on dust particles in clouds and the fertilization of phytoplankton and rainforests through iron contained in dust. The meteorological systems that generate winds strong enough to lift dust cover spatial scales from continental to a few meters. They include (A) low-pressure systems and cold fronts (similar to the ones affecting the UK), (B) so-called haboob dust storms that are generated by the outflow of air cooled by the evaporation of rain from thunderstorms and (C) small-scale rotating dust devils that are dynamically similar to tornadoes.

In order to fully understand the effect of dust on weather and climate, numerical models have been developed that try to simulate the dust cycle from emission over transport to deposition by gravitational settling or by wash-out in clouds. Given the remote location of most dust sources there is only limited observational data available to test the reliability of such models. The highly non-linear dependence of dust emission on near surface wind speed makes it extremely sensitive to the horizontal and vertical resolution of the model as well as to the representation of the planetary boundary layer and deep moist convection.

Dust is the most abundant aerosol by mass and is involved in many processes in the Earth system such as radiative transfer, cloud microphysics and fertilisation of ecosystems. Dust also has an important impact on human health, agriculture, road traffic and aviation.

We are primarily involved in data analysis (ground-based, aircraft, satellite) and modelling studies, using a wide range of models from small-scale Large Eddy to global climate models. We collaborate extensively with other groups both nationally and internationally, including the UK Met Office and the Institute for Tropospheric Research in Leipzig, Germany.

This project aims at revolutionizing the way the emission of mineral dust from natural soils is treated in numerical models of the Earth system. Dust significantly affects weather and climate through its influences on radiation, cloud microphysics, atmospheric chemistry and the carbon cycle via the fertilization of ecosystems. To date, quantitative estimates of dust emission and deposition are highly uncertain. This is largely due to the strongly nonlinear dependence of emissions on peak winds, which are often underestimated in models and analysis data.

The core objective of this project is therefore to explore ways of better representing crucial meteorological processes such as daytime downward mixing of momentum from nocturnal low-level jets, convective cold pools and small-scale dust devils and plumes in models.

To achieve this, we shall undertake (A) a detailed analysis of observations including station data, measurements from recent field campaigns, analysis data and novel satellite products, (B) a comprehensive comparison between output from a wide range of global and regional dust models, and (C) extensive sensitivity studies with regional and large-eddy simulation models in realistic and idealized set-ups to explore effects of resolution and model physics. In contrast to previous studies, all evaluations will be made on a process level concentrating on specific meteorological phenomena. Main deliverables are guidelines for optimal model configurations and novel parameterizations that link gridscale quantities with probabilities of winds exceeding a given threshold within the gridbox.

The results will substantially advance our quantitative understanding of the global dust cycle and reduce uncertainties in predicting climate, weather and impacts on human health.

This project closely collaborates with the UK consortium FENNEC and with dust-modelling activities at the Met Office.

Fennec is a NERC-funded international consortium (2010-2013) aimed at developing a new understanding of the Saharan climate system and its representation in weather and climate models.

In 2011, Fennec has deployed a network of ground-based climate monitoring stations in the western part of the Sahara desert; in Algeria and Mauritania. For two periods, in April and June 2011, intensive measurements with the UK and French research aircraft took place over the region. The measurements are now being used to test and improve models for the Saharan weather and climate.

The Fennec consortium is led by the University of Oxford, with Algerian, Mauritanian, Moroccan, French and German international partners. The University of Leeds is a major partner in Fennec, with responsibility for leading the research into atmospheric dynamics, and major contributions to the leadership and deployment of the field campaigns. At Leeds, the core Fennec team consists of Doug Parker, Jim McQuaid, John Marsham, Matt Hobby, Luis Garcia-Carreras, Phil Rosenberg and Aaron O'Leary.

If you would like to discuss an area of research in more detail please contact the Research Group Lead: Dr John Marsham