The geomagnetic field provides an observational window into the complex dynamics of the Earth's core. Our research investigates problems of core dynamics from three different perspectives: Observation, Theory and High Performance Computing.

Geomagnetic secular variation arises due to flow at the top of the fluid core. By studying the temporal evolution of the magnetic field it is possible to infer the structure of the core flow over past decades to centuries.

Although it is only possible to directly constrain flow at the top of the core, making further dynamic assumptions allows us to predict changes in the total angular momentum of the core, changes that are reflected in the length-of-day record.

Geomagnetic jerks are short (less than one year) changes in the first time derivative of the secular variation of the magnetic field. The origin of these jerks is unknown but they are associated with core flows, the precise determination of which will provide exciting new insights into the rapid dynamics of the core and the electrical conductivity of the lower mantle.

Since we can neither directly observe nor sample the Earth's core, much of our understanding is derived from theoretical models. Furthermore, although the governing equations are known, they cannot be solved analytically (or computationally) for the parameter range relevant to the Earth's core. However, various geophysically motivated approximations lead to simplified models that can be solved that provide useful insight into certain aspects of the full dynamics.

One example of a particular dynamical process that occurs within the core is torsional oscillations, cylindrical waves within the core. These are not only theoretically predicted but are corroborated by mounting observational evidence. Models of these waves enable us to determine the radial magnetic field strength within the core and to investigate mechanisms of core-mantle coupling.

The existence of torsional oscillations strongly suggests a low-viscosity background state, which itself evolves slowly through time. Numerical models of this low-viscosity state are well beyond what is computationally possible, and will remain so for decades to come. Completely inviscid models offer an alternative approach, although they face difficult theoretical hurdles, such as the need that Taylor's constraint be satisfied at all times

Simulations of the full dynamical equations on massively parallel computers have provided increased understanding of the variety of dynamic processes that may operate throughout the Earth's core. Due to the extreme parameter range, conditions in the Earth's core cannot be modelled exactly; therefore, models are based on either subsets of the full equations (eg pure thermal convection), or non-Earth-like parameter regimes. Despite these simplifications, geodynamo models still reproduce Earth-like behaviour (eg magnetic fields of the correct strength and structure, that exhibit dynamical features such as reversals).

Models of thermal convection can be used to test hypotheses of mantle control on long-term core flow. On the other hand, models of short-term dynamics can be created for restricted time intervals and used to probe phenomena such as torsional oscillations and geomagnetic jerks. 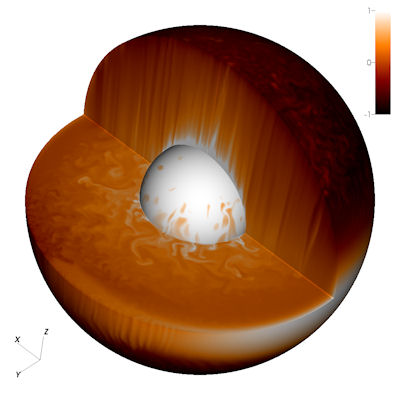 Temperature anomalies in a numerical model of core convection. The inner core is shown in white and the whole model is rotating about the z direction.