Global seismological research at Leeds uses information from recordings of elastic waves from earthquakes to resolve Earth's structure from crust to core with a focus on studying the small scale structure of the Earth on scales of a few, to a few hundred kilometres.

The core mantle boundary (CMB) marks the transition from the solid silicate rocks of the Earth's mantle to the liquid (molten) iron alloy of the outer core. It represents the most important internal boundary of the planet and controls the dynamics of both mantle and core.

The CMB shows evidence for heterogeneities on many length scales. Research at Leeds uses detailed studies of the seismic waveforms to resolve structures like the D" (say Dee-Double-Prime) discontinuity and Ultra-Low Velocity Zones (ULVZ). Further studies resolve the nature and dynamics of large areas of reduced seismic velocities beneath the Pacific and southern Africa (Large Low Shear Velocity Provinces - LLSVP).

The smallest scale structures of the Earth's interior are mostly invisible to us due to the large wavelengths of the seismic waves used in the imaging. On the other hand, small-scale heterogeneities scatter the seismic waves generating specific signatures that can be identified in the data. Using these arrivals we can study structures in the deepest Earth that are only a few kilometres across.

Scattering studies at Leeds target the fate of subducted slabs on their way from the surface of the Earth to the CMB, partially molten material in the lowermost mantle as well as the structure of fault zones in the Earth's crust.

Seismic arrays are installations of several seismic instruments (seismometers) in well-defined configurations that can be used like antennae to study the Earth's deep interior. Seismic arrays allow resolution of very small scale structure due to high quality seismic data and appropriate processing technologies. Most studies of the Global Seismology group at Leeds use seismic arrays. 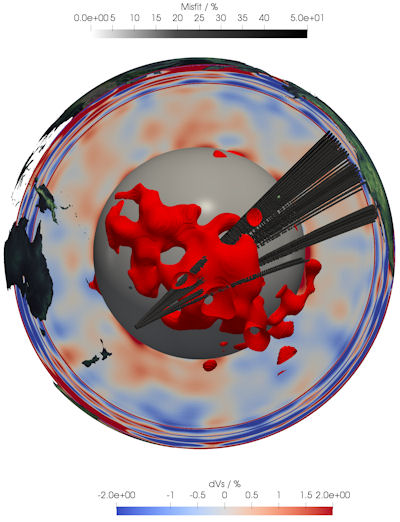