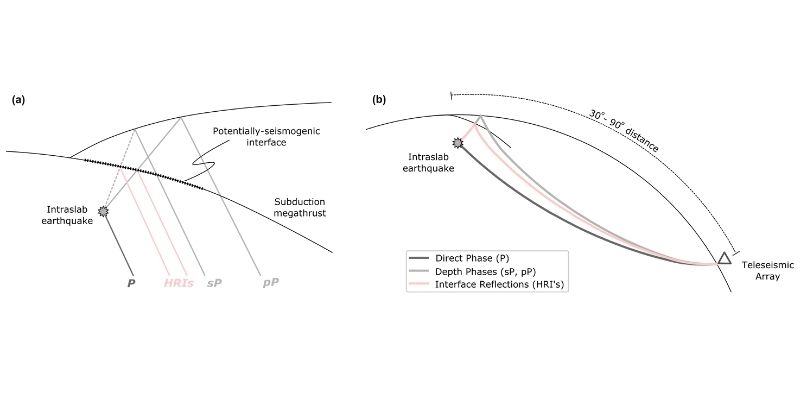 Figure 1: (a) Sketch illustrating the generation of the direct phases (P), depth phases (pP, sP) and precursor phases from a high-reflectivity interface (HRI’s) in the near-field. (b) Sketch showing the propagation of these phases to seismic arrays at teleseismic distances.

The properties of the subduction interface between plates vary in both space and time. In this project you will develop techniques to map the properties of the subduction interface using remote observations of small-amplitude reflected seismic waves from intraplate earthquakes within the downgoing plate. These can be applied to subduction zones irrespective of local instrumentation, and in areas without the sub-aerial exposure needed for modern geodesy.

This will allow us to probe the controls on spatio-temporal variations in the type of slip, in the presence of fluids along the subduction interface, and lead to an appraisal of hazard emanating from these subduction zones.

The plate interfaces of subduction zones generate the largest, most damaging earthquakes on Earth. However, along with major earthquakes, the plate interface can also accommodate the motion between plates through stable sliding or through periods of enhanced aseismic “slow slip”.

Understanding the properties of this subduction interface, and how these may vary in both space and time is critical for understanding its behaviour, and its potential to produce large earthquakes in the future.

Established geodetic techniques are limited to terrestrial environments, limiting their resolving power in most submarine subduction zones, and leaving them unable to probe the behaviours of completely submarine subduction zones (e.g., Tonga-Kermadec, Bonin-Marianas). Sub-sea geodesy is in its infancy, and its prohibitively expensive, requiring extensive seafloor logistics and support. However, remote seismic data offer a way to map the rheological properties of the subduction interface, without the need for extensive near-field instrumentation (e.g., Song et al., 2010).

Using well-located earthquakes occurring within the downgoing plate beneath the subduction interface, detailed waveform analysis suggests that it is possible to detect small-amplitude reflections and conversions from the overlying interface, allowing its elastic properties to be determined, and from these, its slip behaviour to be inferred. In this project, we aim to develop a set of seismological processing routines optimised for detecting these small- amplitude phases within the coda of off-interface earthquakes.

This project will focus on technical development, and the construction of a test dataset, to span the Central American subduction zone. Central America is ideal for this technical development phase, as it is also geodetically well-instrumented, and known to display a range of interface behaviours. This will allow us to compare seismological results for the reflectivity of the subduction interface with other observational proxies, and allow us to determine what it is that a high-reflectivity subduction interface indicates – whether this is a proxy for interface coupling, or for the transient presence of fluids and/or slow slip, and thus what can be inferred about the slip behaviour of the interface using remote data only.